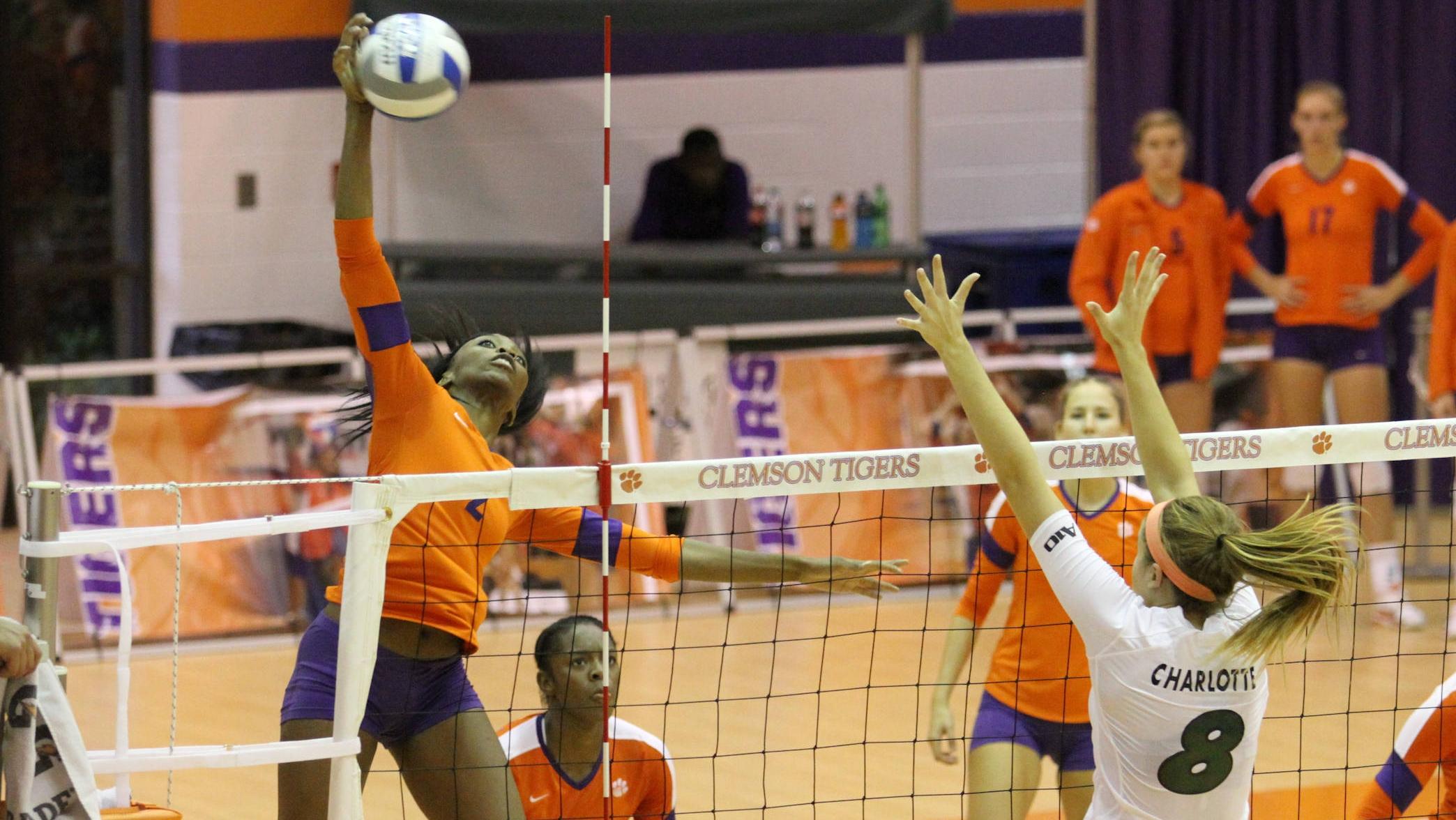 Tiger Volleyball Closes Weekend with a Sweep of Virginia Tech

The win was No. 200 in ACC matches for Jolene Jordan Hoover in her Clemson career, only the second coach in ACC history to reach that milestone.

The Tigers improved to 9-1 at home this season, and each of their past nine wins have come in three sets. Clemson didn’t trail in either the first or third sets, and fought off a 22-20 deficit to take the second set.

Clemson hit .259 and held Tech to .186 and 21 attack errors, with ten of those coming on Tiger blocks. Alexa Rand had eight blocks for the second straight night to lead all players, while Mo Simmons stepped in on four. Jennifer Wiker was a bright spot for the Hokies, tallying a match-high 17 kills, and adding ten digs.

Junior setter Hannah Brenner led Clemson to improved hitting in each of the three sets, climbing from .205 in the first set up to .344 in the third set. She dished out 35 assists and added six digs, four kills, and two blocks in the match, and four Clemson players finished with 19 or more attacks.

Clemson did a great job staying in system, and managed to limit Virginia Tech’s runs. Clemson was able to side out on 69 percent of the Hokies’ serves. It was a key decision for the Tigers, as the Hokies entered ranked 40th in the most recent RPI.

The first set stayed close early, with Clemson clinging to a two-point edge for much of the match. Holding a 14-12 lead, Clemson tallied two straight blocks to force a Hokie timeout, after which Clemson scored the next three points as well, taking a 19-12 lead. Tech got to within four at 24-20, fighting off a pair of set points, but Yaz buried a kill to ice the set, 25-20.

Clemson scored the first four points of the second set, but Virginia Tech quickly pulled within one at 7-6 on a block, and took an 11-10 lead after a kill by Kathryn Caine. The teams traded points before Virginia Tech was able to get some separation at 20-17, forcing a Tiger timeout. Clemson pulled to within one on a service error and a kill from Rand, but Tech appeared to take control again taking a 22-20 lead. Back-to-back attack errors after an Adeleye kill gave Clemson the edge. Wiker put down a kill to tie it at 23-23, but a Faust kill and a stuff block from Brenner and Adeleye on Wiker sealed the set, 25-23.

Clemson opened up a 6-0 lead in the third set and never looked back. Virginia Tech fought back to get within one, but the Tigers tallied four straight to take a 12-8 lead. Virginia Tech would get no closer than five the rest of the way, as Clemson hit .344. Simmons had five kills in seven swings in the set, including the match-clincher.

The Tigers play next weekend at Duke and Wake Forest in what is shaping up to be a key clash for ACC positioning.