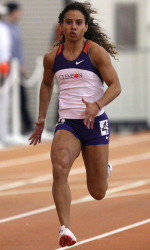 BLACKSBURG, VA – Stormy Kendrick won a pair of sprints on Friday to lead the Tiger track & field teams on the first day of the Virginia Tech Elite Meet. In all, Clemson athletes won seven individual events on Friday.

Kendrick won the women’s 60m dash with a time of 7.29 on Friday. Kendrick was the national leader in the event heading into Friday’s action. Misha Morris, a transfer from Charleston Southern, took seventh in the final but did manage a time of 7.52 in the preliminary round. Joe Craig was the lone competitor in the men’s 60 and he was 12th with a time of 6.93.

Clemson took the top three positions in the men’s 800 meter run. Chris Slate won with a time of 1:51.76, finishing a fraction ahead of Jasen Turnbull (1:51.85). For Turnbull, it was a personal indoor best. Nathan Hendershot, a freshman, was third with a season-best time of 1:52.30. Stephanie Buffo turned in a lifetime best in the women’s mile run, finishing in eighth place. The native of Spartanburg, SC crossed the finish line with a time of 4:58.58. Kim Ruck made her season debut in the 3000 meters and came away with a third-place finish. She posted a time of 9:33.58.

April Sinkler put together her best performance of the young season in the long jump. She placed second with a jump of 20’1.75″. In the men’s long jump, Josh Fowler finished fifth overall after putting together a leap of 23’6″. He did it on his first attempt of the finals, his fourth jump on the night.

Michael Kopanski cleared a personal best 16’4.75″ on his final attempt to win in a field of eight contestants.

Brittney Waller was outstanding in the women’s weight throw once again. The sophomore out of J.L. Mann High School in Greenville, SC was runner-up with a personal best 68’2.5″. Her mark is now second on the Tigers’ all-time performance list. Alex Padgett was sixth in the men’s 35-pound weight competition, as he put together a throw of 63’11”.

The teams return to action on Saturday for the final day at Rector Field House.