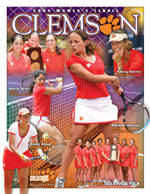 CLEMSON, SC – The 24th-ranked Clemson tennis team (12-5, 5-2 ACC) will conclude its 2006 road schedule this weekend when the Tigers face Duke (12-5, 5-1 ACC) and North Carolina (22-3, 7-1 ACC) on their home courts. Clemson will meet the 14th-ranked Blue Devils on Saturday, Apr. 8 at the Ambler Tennis Stadium in Durham, NC. The Tigers will then travel the short distance to Chapel Hill to take on the #5 Tar Heels at the Cone-Kenfield Tennis Center. Both matches are slated for 1:00 PM start times.

Clemson has been especially successful in double play this season, claiming the doubles point 13 times. The Tiger tandem of Carol Salge and Federica van Adrichem has spent the past five weeks ranked ninth in the Fila/ITA doubles poll. They have compiled a 10-4 record at the flight one position while winning five of seven matches against ranked opponents. Clemson’s duo of Daniela Alvarez and Alexandra Luc boasts a 12-3 ledger and has won four straight matches. The team is listed 56th in the most recent doubles rankings.

Duke leads the overall series score with the Tigers by a 22-15 margin. The Blue Devils also hold an 8-6 advantage in matches played in Durham. However, Clemson has won the last three meetings, including a 5-2 victory last year at the Hoke Sloan Tennis Center. The Tigers also won the last contest on Duke’s home court, claiming a 5-2 decision during the 2004 season. The Blue Devils’ last victory in the series was a 4-3 win at Clemson in 2003. Their last home win came during the 2002 season when they defeated the Tigers, 6-1.

Sunday’s match-up will be the 44th meeting between the Tigers and Tar Heels, with Clemson being the victor in the last four. The Tigers defeated North Carolina twice last season as they upset the Tar Heels, 5-2, during the regular season and then won, 4-1, in the quarterfinals of the NCAA Tournament in Athens, GA. Overall, North Carolina also trails Clemson by a 10-3 margin in matches played on its home court. The Tigers won the last meeting in Chapel Hill, a 6-1 decision in the 2004 season. The Tar Heels last victory came during the 2003 NCAA regionals, played on their home court, as they defeated Clemson, 4-1, that day.