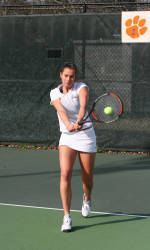 CLEMSON, SC – For the second consecutive week, the Clemson women’s tennis team is ranked 24th in the Fila/ITA Tennis poll, released on Tuesday, Apr. 4. The Tigers were 1-1 last week after winning a 4-3 decision over Florida State and falling to #5 Miami, 6-1. Overall, Clemson boasts a 12-5 record with a 5-2 mark against ACC competition. Three Tiger doubles teams and one singles player were also ranked in the individual polls, with the Carol Salge and Federica van Adrichem tandem highlighting the list at #9 in the doubles rankings.

The duo has compiled a 10-4 overall record during the 2006 season, with a 5-2 mark against teams ranked among the top 40 in the ITA poll. Van Adrichem is also listed with senior Daniela Alvarez at #27. They were 8-2 during the fall season but have played just two matches together during the dual-match season. A third Clemson team, Alvarez and freshman Alexandra Luc, is ranked 56th. Alvarez and Luc have won their last four matches and have a 12-3 overall record for the year.

In the singles rankings, van Adrichem, a freshman from Amersfoort, The Netherlands, dropped to #54 in the singles poll. She has posted an 18-11 overall record with a 9-7 mark in the dual season.

The Tigers are one of six ACC teams ranked in the top 25. North Carolina leads the pack at #5 while Miami is listed sixth. Georgia Tech is ranked 12th, and Duke is listed at #14. Wake Forest is ranked 19th and Clemson rounds out the group at #24.

Up next for the Tigers are the Blue Devils on Saturday, Apr. 8 in Durham, NC. Clemson will then face the Tar Heels on Sunday, Apr. 9 in Chapel Hill, NC.