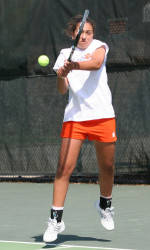 CLEMSON, SC – The Clemson women’s tennis team is ranked 15th in the Fila/ITA Tennis poll released on Tuesday, Apr. 25. The Tigers reached the semifinals of the ACC Tournament last weekend before falling to #1 seed Georgia Tech. They boast a 16-7 overall record for the 2006 season and are awaiting NCAA regional pairings to be announced on Wednesday, May 3. Clemson was listed 17th in the previous rankings.

In the individual polls, Carol Salge and Federica van Adrichem are ranked in both singles and doubles. The duo is listed 13th as a doubles team after posting a 12-8 record during the dual season. Van Adrichem is ranked #54 in the singles poll, while Salge is listed 56th. Van Adrichem, a freshman from The Netherlands, has compiled a 21-13 overall record with a 12-9 mark in the spring season. In her last five matches, Salge has recorded upsets of three opponents ranked in the top 60, while going 4-1. The native of San Roque, Brazil has a dual match record of 17-6 while posting a 24-9 overall ledger.

Six ACC teams are ranked among the top 25, including four in the top 10. Tournament champion Georgia Tech heads the group at #6, while Miami and Duke are listed seventh and eighth, respectively. North Carolina is ranked 10th, followed by Clemson at 15. Wake Forest rounds out the six at #21.