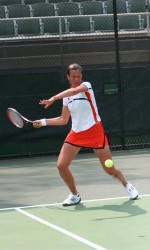 CARY, NC – The bottom half of the Tiger line-up posted straight-set wins on Friday morning in leading the sixth-ranked and #1-seeded Clemson women’s tennis team to a 4-0 victory over #8-seed Virginia in the quarterfinals of the ACC Championships. With the win, the Tigers advance to the semifinals of the conference tournament for the fifth straight year, where they will meet the winner of fourth-seeded Miami and #5-seed Florida State.

That match is scheduled to begin on Saturday at 10:00 am at the Cary Tennis Center in Cary, NC.

Friday’s victory was also Clemson’s 20th of the year, compared to just three losses, giving the Tigers their third 20-win season in the last four years.

The Tigers clinched their 19th doubles point of the season as they claimed matches at the flights one and three positions. Maria Brito and Carol Salge posted an 8-3 victory over Lindsey Pereira and Amanda Rales at number three to record Clemson’s first doubles win. The Tigers’ 12th-ranked tandem of Ani Mijacika and Federica van Adrichem then gave their team the 1-0 lead in the match, defeating Lara Alexander and Caroline Hammond by an 8-4 margin at flight one. With the win, Clemson’s top duo improved to 14-4 on the year, while Brito and Salge remained undefeated at 7-0 since pairing up on Mar. 17.

Brito then put the Tigers on top, 2-0, with a 6-3, 6-3 singles victory against Rales at the flight five singles position. Van Adrichem then defeated Pereira at the number four slot by a 6-3,6-2 margin, and Hadziselimovic clinched the victory for Clemson with a 7-6(2), 6-3 win over Hammond at flight six.

The Tigers had claimed the first set at all six flights, as Mijacika, Salge and Balda each won the tie-breaker at her respective position before the matches were called.