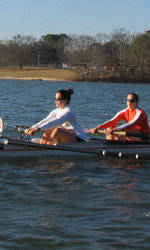 The Clemson rowing team will hold its eighth annual Class Day Regatta on Saturday, October 15. The event is scheduled to feature three separate races between 10:00 AM and 11:00 AM. Each boat in the class race will be dressed in a theme or the rowers will be in costume instead of the traditional uniform.

The first race of the day will be held at 10:00 AM, with three 8+ boats of freshmen competing against one another in a 2,000 meter race. At 10:20 a 1,000 meter alumni race has been scheduled. The final event of the day is the featured class race at 10:40 AM. Last season, the seniors won the event with the theme “Susie’s Worst Nightmare,” referring to 2005 ACC Coach of the Year Susie Lueck.

The event will also serve as the program’s fall parents weekend.