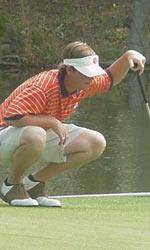 Clemson, SC – Clemson golfers D.J. Trahan and Gregg Jones both ranked among the top 12 college players nationally according to the final Golfweek/Sagarin player rankings. Trahan rated second in the nation by the computer rankings, while Jones finished 12th.

Trahan trailed only Graeme McDowell of UAB in the individual rankings. Trahan’s ranking is the highest final ranking by a Clemson player in history. The previous best was a number-four final ranking by John Engler in 2000-01.

The Clemson team ranked second in the nation in the final Sagarin poll, trailing only Georgia Tech in the Golfweek/Sagarin team rankings. The two teams tied for the NCAA East Regional title with identical 876 scores. The Golf Coach’s Association final ranking is based on the NCAA Tournament, so Clemson’s final ranking according to that poll is third.

Golfstat, the service that compiles the national college golf stats, ranked Trahan and Jones ranked among the best players in the nation in many statistical categories. Trahan ranked in the top five in the nation in eight different categories, including first in the country in par four scoring (3.94) and second in supar strokes/round and scoring average.

Jones is ranked in the top 25 in five different categories, including a number-six ranking par three scoring (3.03) and a #11 ranking in fewest bogeys per round. Clemson freshman Martin Catalioto ranked 11th in the nation in pars per round (11.92).