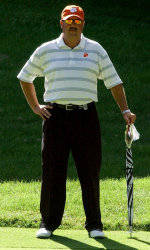 The Clemson golf team will begin play at the 2007 ACC Championships on Friday in Uwharrie Point, NC. This will be the 11th ACC Tournament to be held at the par 72 Old North State Club and the Tigers have won four of the previous 10 tournaments at the site.

Clemson has been successful at the ACC Tournament in recent years. The Tigers have finished fourth or better in each of the last 12 ACC Tournaments, including last year when Clemson was third. That includes five tournament titles in the last 10 years. Over the years Clemson has won the championship nine times and finished second on four other occasions. Clemson’s last tournament title took place in 2004.

 The best team score by the Tigers for a tournament is the 28- under-par recorded by the 1998 team in winning the event at The Old North State Club. The 28-under-par is the sixth best score vs. par in Clemson history for a 54-hole event and the 836 score is the eighth best in Clemson history overall. Clemson was 24-under-par in finishing third last year.

 The best team round is a 268 by the Tigers last year when Clemson shot the 20-under par team score in the second round. That 20-under par round is the best round vs. par in Clemson history in any tournament, not just the ACC tournament.

 Clemson has had at least one player finish in the top 10 in each of the last 12 tournaments. That includes last year when Brian Duncan was third and David May was ninth.

 A Clemson golfer holds the ACC Tournament record for the lowest individual round. Brad Clark shot a 63 at ACC Tournament at Bryan Park in Greensboro, NC on April 20, 1985. A freshman that year, Clark’s 63 is also the Clemson overall record for any round in a tournament, and obviously the single round freshman record for the Tiger program.

 The most consistent Clemson golfer at the ACC Tournament was John Engler. The 2006 PGA Tour player finished in the top five at the ACC Tournament each of his four seasons (1998-2001). He finished fifth as a freshman, fourth as a sophomore, second as a junior and won the title as a senior. He is the only Clemson player in history to record four top five finishes. He shot over par just once in his 12 career rounds in the ACC Tournament and had 10 under-par rounds.