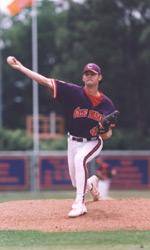 Clemson, SC – Top-ranked Clemson (20-1) opens up its ACC schedule this weekend with Maryland (17-6, 0-3 ACC) at Doug Kingsmore Stadium. Game one is Friday at 7:15 PM. Game two starts at 4:00 PM Saturday and the series concludes Sunday at 1:00 PM. All three games will be broadcast on the radio on Clemson Tiger Sports Properties. The broadcast can be heard live via the internet at www.clemsontigers.com. Live stats will also be available on Clemson’s website.

The Tigers hold a 93-33 edge in the series dating back to 1923. Since 1973, Clemson holds a 71-12 advantage over the Terps. Head Coach Jack Leggett, who won his 400th game at Clemson Wednesday, is 24-2 all-time versus Maryland. The Tigers have won 12 straight in the series, with the last Maryland win coming in 1997, a 7-6 win in College Park. Clemson has lost just once against Maryland in 43 games played at Doug Kingsmore Stadium as well.

Maryland has already won as many games in 2002 as it did in all of 2001, when it finished with a 17-37 record. Maryland has played three conference games. North Carolina, who leads the conference standings with a 6-0 record, swept Maryland in Chapel Hill two weeks ago.

Head Coach Terry Rupp is in his second season at the Terrapin helm, as he previously coached at Division II Tampa from 1996-00. His top assistant, Gregg Kilby, is no stranger to the Clemson area. He was a volunteer coach at Clemson during the 1994 and 1995 seasons. He also graduated from Southern Wesleyan in nearby Central in 1991.

Senior righthander Steve Reba (6-0, 2.52 ERA) will start Friday for the Tigers. Reba has 26 career victories, sixth-most in Clemson history. He needs one win to tie Andy Taulbee (1992-94) for fifth place. Reba has earned the win in 10 of his last 11 outings dating back to last year. The “one” outing that kept him from perfection over that stretch was a no decision at eventual national champion Miami (FL) in the Super Regional last season. He will match-up against junior righthander Jared Stuart (3-0, 2.90 ERA). Stuart has 36 strikeouts and a .217 opponents’ batting average in six starts.

Sophomore righty Steven Jackson (3-1, 3.86 ERA) will take the mound in game two for the Tigers. He is coming off 6.0 scoreless innings of work in earning the victory against Maine on March 22. The Terrapins will send out junior righty Todd Ainsworth (4-1, 1.83 ERA). Ainsworth has struck out 33 while walking only eight in 31.1 innings pitched. Both teams have yet to decide on a starter for game three.

First-baseman Khalil Greene leads the Tigers with a .512 batting average. Clemson is hitting .353 as a team, well ahead of the Tiger single-season record of .341 set in 1991.

The Terrapins are led in hitting by junior shortstop John McCurdy, who is hitting .500 with 11 homers and 48 RBIs in just 22 games. He has also stolen 12 bases in 13 attempts. Maryland is hitting .329 as a team and is averaging over 10 runs per game.