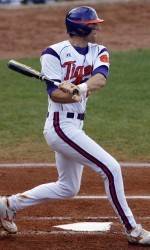 The winner of the Clemson Regional will play the winner of the Atlanta (GA) Regional between June 11-14. The four teams in that regional are #1-seed Georgia Tech, #2-seed Alabama, #3-seed Elon, and #4-seed Mercer.

Clemson’s NCAA Tournament History The 2010 season marks Clemson’s 35th trip to an NCAA Regional dating back to the 1947 season. That year, Clemson actually advanced to the Final Eight of the NCAA Tournament, but it is not considered a College World Series season because only two teams went to the CWS in those days.

Clemson won the 1947 District III Tournament in Charlotte by coming through the losers’ bracket. The Tigers, coached by Randy Hinson, lost in the first round to Alabama 8-2, then came back with a win over Auburn and two wins over Alabama to advance. Clemson’s season ended when Yale, led by future President George H.W. Bush, defeated the Tigers in New Haven, CT by a score of 7-3. Bush was 1-for-3 as the starting first baseman.

Clemson made its first trip to Omaha and the College World Series in 1958 when the Tigers again came through the losers’ bracket. After losing to Florida in the first round, Clemson came back to defeat George Washington, Florida State, and Florida twice to advance under first year Head Coach Bill Wilhelm. Clemson defeated Florida 15-14 and 3-1 on June 9 to advance. Harold Stowe struck out 17 in that second game on June 9, and that is still a Clemson single-game record for strikeouts in an NCAA Tournament game.

The Tigers advanced to Omaha in 1959, this time with three easy wins; one over Georgia Tech and two over Florida State. One of the wins over the Seminoles was a 24-2 victory at Gastonia, NC. That tally is still tied for the most runs scored by Clemson in an NCAA Tourney game.

The Tigers did not advance to Omaha again until 1976. In fact, Clemson made just one NCAA Tournament appearance between 1960 and 1974. That was in 1967 when Clemson reached the Regional Championship, but lost to Auburn 6-5.

Clemson made it to Omaha three out of five years between 1976-80. Clemson won a regional in Columbia, SC in 1976 with three straight wins, then came through the losers’ bracket in Miami (FL) in 1977 to advance to Omaha. The 1980 season was the first year Clemson played host to a regional, as Clemson swept three games by scoring 45 runs, including 17 in a 17-12 win over South Carolina.

Overall, Clemson has been to a regional in 35 seasons, sixth-most all-time. Clemson’s all-time record in NCAA play is 101-73, a 58.0 winning percentage.

Clemson is 56-33 (.629) under Head Coach Jack Leggett in NCAA Tourney play, including a 36-6 record (.857) in home NCAA Tourney games. Leggett has taken Clemson to a regional 16 times in the 17 years he has been Clemson’s head coach, and the Tigers have advanced to the College World Series five times. Leggett has also taken Clemson to a super regional eight of the 11 years that format has been in existence.

Scouting #1-Seed Auburn First-seed and #14-ranked Auburn (40-19) enters the Auburn Regional after going 1-2 in the SEC Tournament at Hoover, AL last weekend. Auburn, who is 27-7 at home, had a 20-10 record during its conference regular season, as it finished atop the SEC West Division. The 2010 season marks the 18th time in school history and the first time since 2005 that Auburn has played in an NCAA Tournament.

Auburn is led by second-year Head Coach John Pawlowski, who lettered at Clemson three times (1983-85) and went on to play two years (1987,88) in the Major Leagues with the Chicago White Sox. He later went on to be Clemson’s pitching coach from 1994-98, coaching the likes of Kris Benson, Billy Koch, and Ken Vining. The Tigers won each of their last five SEC series.

Auburn is hitting .348 with a .585 slugging percentage and .424 on-base percentage. Auburn, who is fielding at a .961 clip, has also totaled 131 doubles, 14 triples, a national-best 117 home runs, and is averaging 9.1 runs per game along with 68 hit-by-pitches and 61 stolen bases in 91 attempts. Auburn is also in the top 10 in the country in several other offensive categories.

Clemson and Auburn have met 90 times on the diamond, with the SEC Tigers holding a 47-40-3 lead in the series dating back to 1901. The two teams last met in a three-game series at Auburn in 2005. Auburn won two of three games despite Clemson outscoring Auburn in the series 23-17.

Auburn won two of three games at Clemson in 2004, again despite the ACC Tigers outscoring the SEC Tigers 24-23. In 2003, the two teams met four times, including a three-game series at Auburn that saw the SEC Tigers win two of three contests. Then Clemson traveled to the Auburn Regional in the 2003 postseason and saw its season end at the hands of Auburn by a score of 15-0.

Clemson is 16-28-3 against the SEC Tigers in games played at Auburn. The ACC Tigers also own a 5-4 record against Auburn in NCAA Tournament games and 0-2 record under Head Coach Jack Leggett.

Scouting #2-Seed Clemson Second-seed and #16-ranked Clemson (38-21) enters the NCAA Tournament coming off one win in three games in the ACC Tournament at Greensboro, NC. Clemson was 18-12 during the ACC regular season, finishing atop the Atlantic Division standings. Clemson is making its 23rd NCAA Tournament appearance in the last 24 years and 35th overall, sixth-most in the nation.

The Tigers, who are 8-10 on opponents’ home fields and 3-3 in neutral-site contests, are led by 17th-year Head Coach Jack Leggett. His 762 wins are seventh-most in college baseball during his tenure. The Tigers are also 7-8 against top-25 ranked teams in 2010.

Junior lefthander Casey Harman (6-2, 4.14 ERA) is Clemson’s top starting pitcher. The South Burlington, VT native has made 15 starts for a total of 91.1 innings pitched. He has allowed 86 hits (.246 opponents’ batting average) and 30 walks with 78 strikeouts. Junior righthander Alex Frederick is 6-2 with two saves and a 4.01 ERA in 51.2 innings pitched in a team-high 27 appearances (one start). Freshman righthander Tomas Cruz has a team-high three saves. Clemson is fielding at a .962 clip in 2010 as well.

Southern Mississippi is hitting .323 with a .498 slugging percentage and .422 on-base percentage. Southern Mississippi, who is fielding at a .971 clip, has also totaled 112 doubles, 14 triples, 71 home runs, and is averaging 8.6 runs per game along with 50 stolen bases in 69 attempts.

Senior righthander Scott Copeland (11-0, 3.38 ERA) is the Golden Eagles’ top starting pitcher. The White Oak, TX native has made 13 starts and one relief appearance for a total of 90.2 innings pitched. He has yielded 86 hits (.251 opponents’ batting average) and 23 walks with 64 strikeouts. Junior righty Collin Cargill has a team-high nine saves along with a 1.86 ERA and has not allowed a homer in 38.2 innings pitched over 26 relief outings.

Clemson and Southern Mississippi have never met on the diamond.

Jacksonville State is led by ninth-year Head Coach Jim Case. The Gamecocks are riding a six-game winning streak and have already played a game at Plainsman Park in 2010. Auburn defeated the Gamecocks 9-7 on May 18.

Clemson and Jacksonville State have never met on the diamond.

Polls The Tigers fell two spots to #20 in the Sports Weekly coaches poll this week after going 1-2 in the ACC Tournament last week. The Tigers also fell out of the Baseball America ranking and stayed at #16 in the Collegiate Baseball poll. With Clemson’s top-25 ranking this week, it marks the 34th week in a row the Tigers have been ranked in the top 25 of at least one of the three major polls dating to the start of the 2009 season.

Joining Clemson with the accomplishment in 2009-10 are California, Florida, Florida State, Georgia Tech, Minnesota, Texas, and Texas A&M. As you can see by the list below, the ACC was the only conference in the nation with three schools to do it.

Clemson also accomplished the “Major Sports Triple” in 2008-09. The only four schools to do it each of the last two years are Clemson, Florida State, Minnesota, and Texas.

Clemson currently has seven teams ranked in the top 25 of their respective sports, including six in the top 16. Football finished #24 in the AP poll. Women’s indoor track finished #7 and the outdoor team is currently #6. Its final ranking will be determined by its finish in the NCAA meet in mid-June.

The Clemson rowing team finished #15 at the NCAA Championships, while the women’s tennis team had a #9 seed in the NCAA Tournament. Its final ranking will be announced later this week. The Clemson men’s golf team is #14 in the latest Sagarin computer rating, while its final rating will be determined at the NCAA National Tournament at The Honors Course in Chattanooga, TN this week.

The Tiger baseball team is ranked #16 in this week’s Collegiate Baseball poll. Its final ranking will be determined after the College World Series.

27 That’s how many of Clemson’s 59 games have been against teams that will play in the 2010 NCAA Tournament, which equates to neary 46 percent. Clemson has a 14-13 record against the teams in the field. The Tigers have played nine different teams that are in the NCAA Tournament.

Clemson has played three top-eight national seeds in Virginia, Coastal Carolina, and Georgia Tech for a total of eight games. The Tigers are 2-6 in those eight contests, but only one of those games was played at Doug Kingsmore Stadium. The Tigers are also 6-5 against #1 seeds, 4-3 against #2 seeds, and 4-5 against #3 seeds. Clemson has not played a #4 seed this year.

Tigers Go 1-2 in the ACC Tournament in Greensboro Clemson, ranked #16 in the nation, went 1-2 in the ACC Tournament at NewBridge Bank Park in Greensboro, NC from May 26-29. Clemson and its three opponents both scored 25 runs, while the Tigers hit .292 with six homers and a .528 slugging percentage. Brad Miller led the Tigers by going 6-for-12 with a homer, triple, double, four RBIs, six runs, and two walks in the tournament. Mike Freeman both went 5-for-12, while Shaffer added a homer, two doubles, five RBIs, and five runs. Jeff Schaus hit two long balls as well. In two relief appearances, Kevin Brady allowed three hits and no walks with 10 strikeouts in only 4.1 innings pitched.

In the Tigers’ first game of the ACC Tournament on May 26, N.C. State scored five runs with two outs in the sixth inning to take the lead for good in its 13-8 win over Clemson. The Tigers took a 4-3 lead on Schaus’ two-run homer in the fifth inning, but five straight run-scoring singles by the Wolfpack in the sixth was Clemson’s undoing. Kyle Wilson went 4-for-5 with a homer, four RBIs, and four runs to lead N.C. State’s 16-hit attack. Miller went 3-for-5 with a double and three runs, while Schaus went 3-for-4 with a homer, double, and three RBIs for Clemson, who had 11 hits. Casey Harman and Brady, two of five Tiger hurlers, combined for 14 strikeouts.

In the Tigers’ second game of the ACC Tournament on May 28, Sean Ryan’s two-out single in the eighth inning scored Andrew Rash to give #16 Virginia Tech a 9-8 win over Clemson. The Hokies jumped out to a 5-0 lead in the first inning, but Miller’s two-run homer in the second and a four-run frame in the fourth gave Clemson the lead. But Virginia Tech regained the lead with a run in the fifth. Chris Epps’ RBI groundout in the top of the eighth tied the score, but it was not enough for the Tigers. Austin Wates had a game-high three hits for Virginia Tech, who outhit the Tigers 13-7. Schaus added a solo homer, while Shaffer hit two doubles with two RBIs. It was the first-ever meeting between the two teams in the ACC Tournament.

In the Tigers’ third game of the ACC Tournament on May 29, Will Lamb pitched 6.1 strong innings to lead Clemson to a 9-3 win over #6 Georgia Tech. Lamb allowed six hits, two runs, and four walks to earn the win in his first start since April 18. Brady tossed 2.0 perfect innings with four strikeouts to close out the game. Shaffer’s three-run homer in the first inning gave Clemson a lead that it never relinquished. Parker added a solo homer in the eighth for the Tigers, who outhit Georgia Tech 13-10. Spencer Kieboom had a game-high three hits, while Shaffer added three runs. The win was Clemson’s 100th in ACC Tourney history.