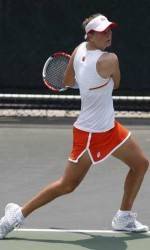 PACIFIC PALISADES, CA – Three Clemson women’s tennis players are in Pacific Palisades, CA at the Riviera/ITA All-American Championships. Josipa Bek earned entry into the main singles draw, while Nelly Ciolkowski and Keri Wong are in the singles qualifying draw. Wong and Bek will pair up for the doubles tournament.

There are 64 players in the Pre-Qualifying tournament, with the final eight making it to the Qualifying rounds. The 64-player Qualifying field will then play for the eight spots in the Main Draw.

In doubles, Wong and Bek, ranked fifth nationally, will play in the main draw as the #5 seed, and will likely play a tandem from the Qualifying tournament.