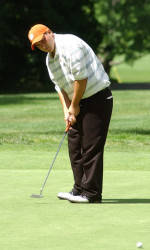 Three Tigers Qualify for US Amateur

Three members of the 2005 Clemson golf team have qualified for the United States Amateur, while a fourth is an alternate. Qualifying for the event that will be played August 22-28 at the Merion Golf Club in Ardmore, PA has been in progress since July 17.

Former Clemson two-time All-American Jack Ferguson made the field on Tuesday when he finished second at the sectional tournament held at Stonebridge Golf Club in Monroe, NC. Ferguson finished with a 36-hole, two-day total of 135, tying him with Robert Riesen of Pinehurst, NC. Webb Simpson of Raleigh, NC won the sectional with a 131 total. Ferguson finished 11th last week at the prestigious Porter Cup when he shot a two-under-par 278. Ferguson was ranked 49th according to Golfweek’s US Amateur rankings through events of July 17.

Stephen Poole, Clemson’s top golfer at the 2005 NCAA Regional in Nashville, TN in May, was the top qualifier out of the sectional held at Woodside Plantation in Aiken, SC on Monday. Poole had a 133 total for the 36 holes. Tanner Ervin, who will be a sophomore on the 2006 Clemson team, had a 139 total and was also a qualifier from that sectional, as he finished fifth.

Clemson rising senior Brian Duncan is the first alternate from the sectional held last week in Durham, NC at the Old Chatham Golf Club. Duncan had a 141 total for the 36 holes.

The US Amateur will be held at Merion Golf Club in Ardmore, PA, the site of former Clemson All-American Chris Patton’s US Amateur victory in 1989.