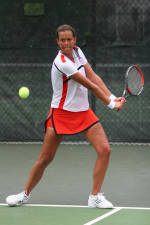 GREENSBORO, NC – Three Tigers earned selections to the 2007 All-ACC Academic Women’s Tennis Team, as announced by Atlantic Coast Conference Commissioner John Swofford on Tuesday afternoon. Sophomore All-American Federica van Adrichem was named to the team, which is in just its second year of existence, for a second time, while freshmen Esfefania Balda and Ina Hadziselimovic were first-time honorees.

This year’s 20-member academic squad included 10 All-ACC performers, six All-Americans and eight repeat honorees from 2006. To be eligible for consideration, a student-athlete must have earned a 3.00 grade point average for the previous semester and maintained a 3.00 cumulative average during her academic career.

Van Adrichem, a history major from Amersfoort, Holland, earned All-America honors in doubles play for the 2007 season after being ranked fourth in the final Fila/ITA Tennis poll with partner Ani Mijacika. The duo made Clemson history with its run in the NCAA Doubles Championships, advancing to the semifinals for the best performance in the national tournament for a Tiger tandem. They boasted an 18-5 record for the year with a 7-2 ledger in ACC action. Van Adrichem also owned a 17-7 singles record for the fall and spring seasons combined.

A native of Guayaquil, Ecuador, Balda joined the Clemson team in January and went on to record a 16-8 overall singles ledger and a 7-3 mark against conference opponents, playing primarily at the flight two and three positions. She was ranked 87th in the final singles poll of the season.

Hadziselimovic compiled a 17-12 overall record for the 2006-07 season and won her last four decisions of the year. She helped the Tigers to post a victory over Virginia in the second round of the ACC Tournament and also recorded a straight-set win in Clemson’s 4-0 sweep of Coastal Carolina in the first round of the NCAA Regionals.