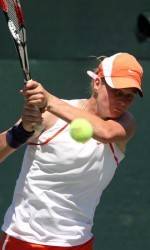 GREENSBORO, NC – Three Clemson women’s tennis players were named to the All-ACC team as announced by the conference on Thursday. Sophomore Ina Hadziselimovic and sophomore Keri Wong each earned their first career honor.

Each of the three has been a valuable contributor for Clemson, which boasts a #8 national ranking and 21-4 overall mark, including 9-2 in the league. The Tigers begin play in the ACC Tournament on Friday as the three seed.

Bek, a sophomore from Osijek, Croatia, earns her second All-ACC honor. She is 7-3 in ACC singles competition and 9-1 in doubles during the conference season. Bek was the ITA Carolina Regional Singles Champion during the fall, and was an All-American in Singles and Doubles in 2009. Overall, she boasts a 26-12 record in singles and a career-best 27-12 record in doubles in 2010. She is currently ranked 19th in the nation in singles and 9th in doubles.

Hadziselimovic has put together a spectacular senior season. The Sarajevo, Bosnia native, has posted career-bests in singles wins (24) and doubles wins (31). She has become Clemson’s all-time leader in doubles wins with 101. Additionally, her 86 singles wins are 11th in clemson history. The two-time Academic All-ACC member was an All-American in 2009 in doubles, as she and Bek advanced the Elite Eight. The senior has posted a 9-2 ACC singles mark, primarily at No. 3, and a 10-1 mark in doubles, all at the No. 1 position.

Wong earns her first career All-ACC honor. The sophomore has been terrific for Clemson in the No. 2 slot. She was named ACC Player of the Week on March 9 after going undefeated against #13 FSU and #20 USF. The 2009 Doubles All-American has a 19-5 dual match record, including 8-3 in the ACC.

The three selections ties for the most of any league team this season, and is the first time the Tigers have placed three on the All-Conference team since 2005, when they went to the Final Four.