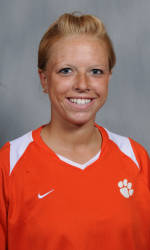 GREENSBORO, NC – Three members of the Clemson women’s soccer team were named to the 2008 All-ACC Academic Women’s Soccer Team as announced by Commissioner John D. Swofford on Wednesday afternoon. Seniors Julie Bolt and Molly Johnson each earned the academic honor for the third time in their four-year careers, while junior Lindsey Jackson was named to the team for the first time for the Tigers.

Bolt, a senior from Charleston, SC, led Clemson in scoring in 2008 with nine goals and one assist for 19 points. The forward garnered second-team All-ACC honors in 2006 and 2007 and concluded her Tiger career with 19 goals and 11 assists for 50 points. Bolt, a graduate student in counselor education, was also named to the All-ACC Academic Women’s Soccer Team in 2006 and 2007, and was a member of the ACC Academic Honor Roll from 2005-07.

Jackson, a junior defender, started all 17 games for the Tigers in 2008. The Raleigh, NC native scored two goals and tallied two assists on the season. The health science major is a first-time All-ACC Academic Team member and has been named to the ACC Academic Honor Roll twice, in 2006 and 2007.

Johnson, a senior and native of Stuart, FL, was a mainstay on the Tiger defense, starting all 82 games of her four-year career on the Clemson back line. Johnson netted three goals and recorded one assist in 2008. The marketing major earned All-ACC Academic honors for the third time in her career and was also a three-time member of the league’s Academic Honor Roll from 2005-07.

Click on the link below to view the complete team: