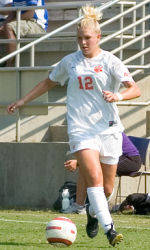 Julie Bolt, Elizabeth Jobe, and Britten Meyer were the players from Clemson named to the team.

To be eligible for consideration, a student-athlete must have earned a 3.00 grade point average for the previous semester and maintained a 3.0 cumulative average during her academic career.

“Our team has achieved a 3.0 or higher for 13 consecutive semesters and it is players like these that are leading the way for us,” said Clemson Head Coach Todd Bramble. “The level of excellence they bring to the classroom and soccer field everyday is a source of tremendous pride for our coaching staff.”