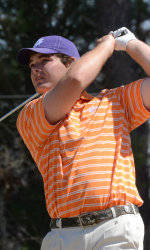 CLEMSON, SC – Three golfers with ties to Clemson will have a shot at the South Carolina Amateur Championship on Sunday. Heading into the final round at the par 72 Colleton River Club Dye Course, current Tigers Jacob Burger and McCuen Elmore, and associate head coach Jordan Byrd are all in the top 10 entering the final 18 holes of the four-round event.

Burger and Elmore will be two of the senior leaders on Clemson’s team this coming year. Burger had a 70 on Saturday to continue his consistent play. He had a pair of 71s in the first two rounds and joins leader Daniel Stanley as the only players in the field to shoot under par in each of the first three rounds. Stanley, who is from Inman, SC, stands at eight under par 208 entering the final round.

Burger has played well at the Colleton River Course over his young career as he has won a pair of qualifiers for different events at the course.

Burger is in third place entering the final round with his 212 score, while Elmore is tied for fifth at 215. Elmore has had rounds of 71-70-74 for his first three rounds.

Clemson associate head coach Jordan Byrd shot his second straight round of 69 on Saturday and he stands in fourth place with a three round total of 214. After an opening round of 76, Byrd is the only player in the field to shoot in the sixties in the second and third rounds. He had three consecutive birdies at one point in his round on Saturday. His round of 69 was one of just two rounds in the 60s recorded on Saturday.

Three other Tigers are in the top 25 entering the final round. Sophomore Thomas Bradshaw shot a one under par 71 on Saturday and stands at 218 for the 54 holes, good enough for 12th place. Stephen Behr, who will be a freshman on this year’s team, and Crawford Reeves, who will be a junior for the Tigers, are tied for 23rd at 220.