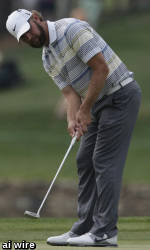 Byrd is 18th on the PGA Tour money list this year with over $2.4 million. He has six top 25 finishes, including a victory at the season opening Hyundai Tournament of Champions in Maui and second-place finish at the Wells Fargo. Glover is 39th on the money list with nearly $1.6 million in earnings. He defeated Byrd in a playoff to win the Wells Fargo Invitational in Charlotte in May.

Glover had a 12th place finish in his last Major championship, the British Open and has the record for the best finish by a Clemson golfer at a PGA Championship. He finished fifth at Hazeltine Country Club in Minnesota that year.

Trahan has made the cut in two of his last four PGA Championships. He is 123rd on the PGA Tour money list so far this year with $549,035. He has made 13 cuts this year and has five top 25 finishes.