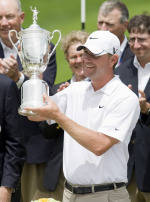 CLEMSON, SC – Former Clemson golfers Lucas Glover, Charles Warren and Ben Martin all will begin play in the 2010 United States Open at Pebble Beach on Thursday. This marks the third consecutive year at least three former Tigers have played in the US Open.

Glover won the event last year with a four-under par score of 276 at Bethpage Black, and he became the first former Tiger to win a Major. The native of Greenville, SC, who was an All-American at Clemson from 1998-01, followed up his victory at the US Open with a fifth-place finish at the PGA last August.

So far this year, Glover has won $1,166,929 and has made the cut in 10 of 14 tournaments, including a third-place finish at The Players Championship. That was the highest finish by a Clemson player in the history of that tournament. Earlier this year Glover finished 36th at The Masters and he has now made the cut in three of his last four Majors and 8 of 15 in his career.

Warren went through sectional qualifying to make the field at the US Open. It is the second time in his career he has made the field at the US Open. Ironically, the only other time he has done it was 2000, the last time it was also held at Pebble Beach. Warren finished 37th that year, and he finished 62nd at the 2006 PGA, so he has made the cut in each of his two previous Major appearances.

Warren has made the cut in three of eight PGA Tour events so far, including this past weekend’s event in Memphis, where he finished 44th. This has been a big year for Warren, who was inducted into the Clemson Ring of Honor in the fall.

Warren and Glover were starters on Clemson’s 1998 team that finished second in the nation. Warren won the national championship in 1997, the only Clemson golfer to win the title. He played for the Tigers from 1995-98.

Martin will be making his second appearance in the US Open. He made the field last year as a qualifier. He shot an opening round 72 at Bethpage Black, then shot a 78 in the second round and missed the cut. He qualified for this year’s US Open by finishing second at the 2009 United States Amateur.

Martin, who will play the 2010 United States Open as an amateur, will turn professional after the US Open. He led Clemson to a #16 finish at the NCAA Tournament two weeks ago with a ninth-place finish. He also finished second at the Southeast Regional. He was one of just six players nationally to record a top 10 finish at the regional and the national tournament.