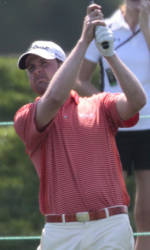 Glover shot a 74 on Sunday at the Royal St. George’s Course in Sandwich, England and finished with a 283 score, three over par for the 72 holes. Glover, who was the co-leader with eventual Champion Darren Clarke after 36 holes, had a 66 in the first round, the lowest round in the British Open by a former Clemson golfer. His 12th place finish was the best ever by a former Clemson golfer at the British Open and it was the fourth best finish in any major championship by a former Tiger. Glover now owns three of the top four major championship finishes among former Tigers.

Former Tiger Kyle Stanley finished 44th at the British Open with an 11-over par score of 291. He joined Glover with a 74 on Sunday. It was Stanley’s second made cut in a major in his short career. He finished 53rd at the 2009 US Open as an amateur.

Trahan had his first top 10 of the year with his ninth place finish at the Vikings Classic in Madison, MS. He had a 71 on Sunday to finish at 18 under par 270. Trahan won the tournament in 2006 with a 275 score on the same course. He also finished third at last year’s Vikings Classic.

Hendrix finished 14th with a 273 score at the Chiquita Classic on the Nationwide Tour in Cincinnati. A starter with Trahan on Clemson’s 2003 National Championship team, Hendrix had rounds of 67-69-66-71 for the 72-hole event. Former Tiger Tommy Biershenk finished 27th with a 276 score and Charles Warren finished 33rd with a 277 score.