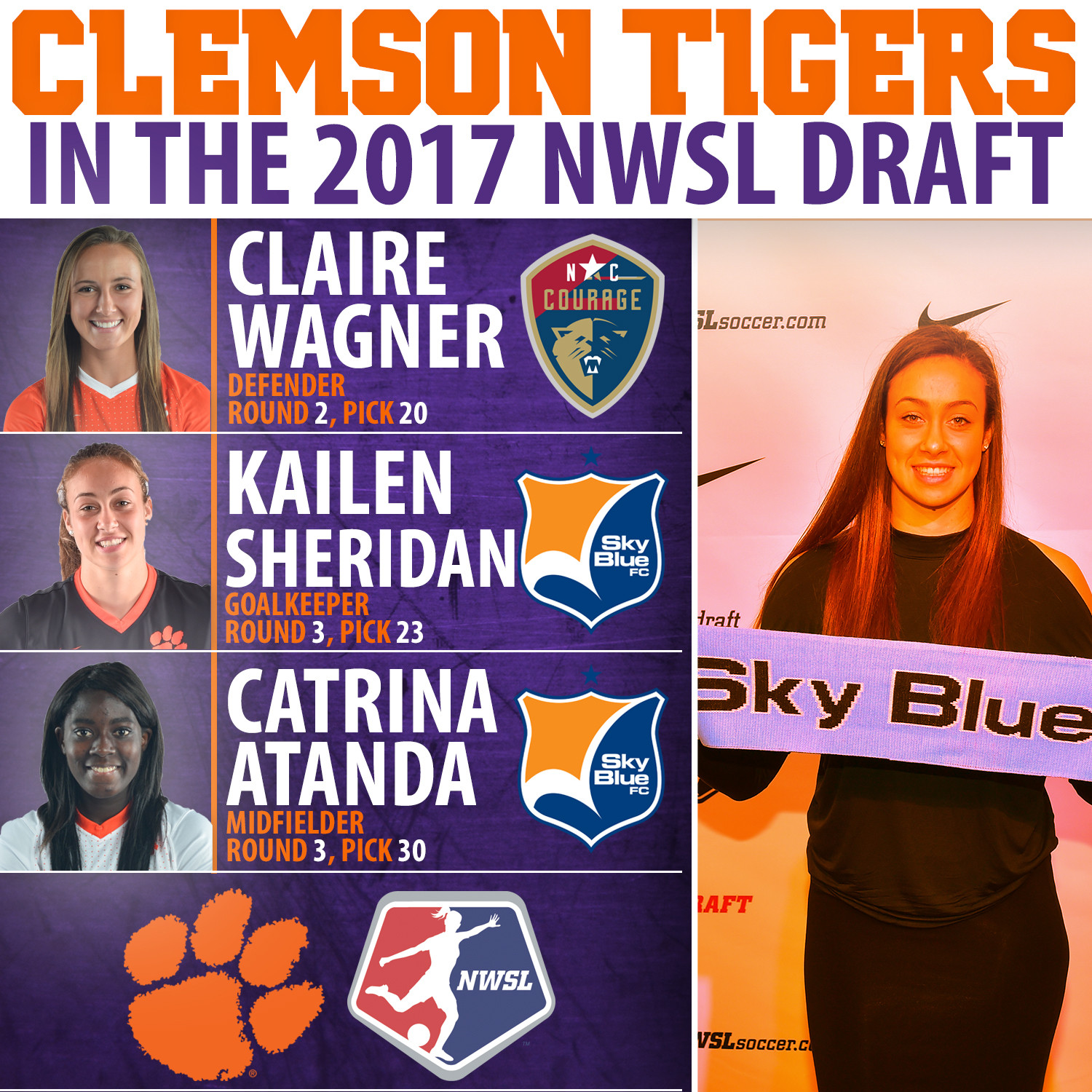 CLEMSON, S.C. – Three players from the 2016 NCAA Sweet 16 Clemson women’s soccer team were selected in the 2017 National Women’s Soccer League College Draft on Thursday, Jan. 12. Claire Wagner, Kailen Sheridan and Catrina Atanda were all drafted by NWSL teams. The three selections were the second-most from any school in the 40-player draft, with only Southern Cal having more draft picks, with five.

Wagner, a defender, was the Tigers’ first draft pick, and was selected 20th overall by the North Carolina Courage. The Courage is relocating from Western New York to Wagner’s hometown of Cary, N.C. Sheridan was the 23rd overall pick in the draft, going to Sky Blue FC (Piscataway Township, New Jersey). The Whitby, Ontario native was just the second goalkeeper to come off the board on draft day. Atanda was Clemson’s third selection, at 30th overall. Like Wagner, Atanda is headed back to her home state, as the Belle Mead, N.J. native joins Sheridan at Sky Blue FC.

Atanda was named to the NSCAA All-America Third Team in 2016, while all three Tigers were All-ACC honorees, with Atanda and Sheridan on the conference’s First Team and Wagner on the Third Team. Atanda, Sheridan and Wagner were also four-year starters for Clemson, and their class is credited with helping Head Coach Eddie Radwanski and his staff return the Tiger program to excellence over the past four seasons.

Clemson led all ACC schools with its three draft picks. Boston College, Duke and Virginia each had two, while North Carolina had one player selected.

A Note from Head Coach Eddie RadwanskiCongratulations to our girls! It was very exciting to watch Kailen, Catrina and Claire be selected in the NWSL Draft! The opportunity to play at the next level, to play professional soccer, to realize a dream is really special! These players have worked hard and have invested themselves to lift our program and they are being rewarded as a by-product of this work ethic.

I am honored and humbled to be their Coach. Being with them as they started their journey at Clemson and being here in LA at the draft to share this moment with them is priceless!

The draft went great! To have Kailen and Catrina selected by Sky Blue FC in New Jersey, and for them to be together is awesome. New Jersey is Catrina’s home state and is also where I grew up and played, so I’m super excited to watch them play! For Claire to be selected by North Carolina FC and play in her hometown of Cary, N.C., wow! That’s so very special for her and her family!

I know from chatting with the girls that they want to thank their Clemson teammates…without them, they wouldn’t be where they are today. Our culture, environment and family atmosphere were very important to their success!

What a great time to be a Clemson Tiger!!

From a very proud Coach!-Eddie Radwanski

Clemson in the Draft on Social Media