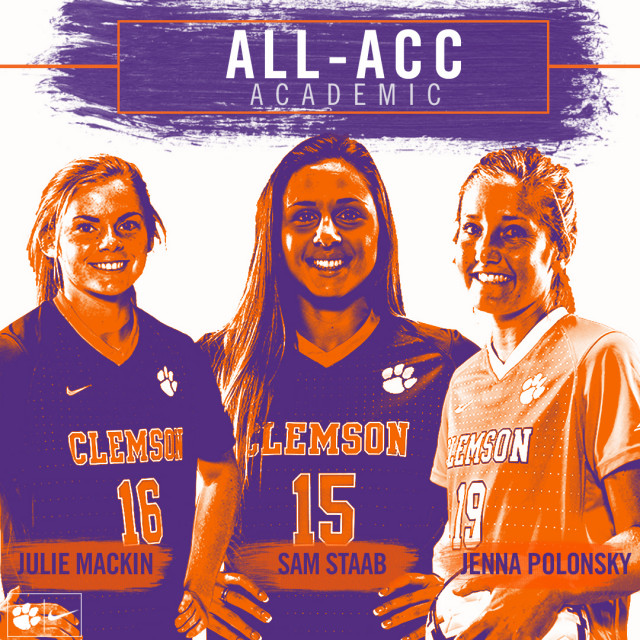 CLEMSON, S.C. – Julie Mackin, Jenna Polonsky and Sam Staab each earned a spot on the 2017 All-ACC Academic Women’s Soccer Team, as announced by the conference on Thursday. This is the sixth consecutive season that two or more Tigers have earned the ACC’s academic accolade.

Staab is one of five ACC players to be recognized for a third time in her career. The junior defender played every single minute of the season (1,802) anchoring the Clemson backline. The San Diego, Calif. native also contributed offensively, with four assists on the season, all four coming on game-winning goals. Staab also earned All-ACC Second Team honors in November for her key role on the field during the 2017 season.

Polonsky graduated from Clemson in May of 2017 with a degree in Marketing, returning to earn her Master’s degree in Youth Development. The Winston-Salem, N.C. native played a key role in the midfield for the Tigers this season, leading the team in scoring with seven goals, five assists good for 19 points, tallying five of those points against SIUE on Aug. 18 in the season opener. Polonsky started all 19 matches, playing 1,656 minutes, second most on the team.

Mackin, a sophomore defender, has a 4.00 cumulative grade point average as a Nursing major. She started all 19 matches on the Clemson backline, logging 1,647 minutes on the field. She tallied three assists on the season, while helping the defense hold opponents to a 0.75 goals against average and allowing only 15 goals. The Castle Rock, Colo. native was also named to the 2017 CoSIDA Academic All-District team earlier this year.

13 of the 14 ACC women’s soccer programs had at least one player honored on the 2017 All-ACC Academic team.