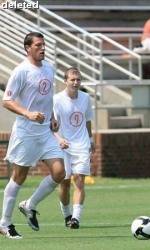 CLEMSON, SC–Three Clemson players were named to the 2008 All-Atlantic Coast Conference men’s soccer team as announced by the league office on Tuesday.

Newton has started 15 matches for the Tigers this season. He has played in 44 matches and has two goals and four assists in his career from his defender position.

Blaise has started all 17 matches as a freshman. The native of Miami, FL has proved to be a stalwart in Clemson’s defense this season.

Over the years, 98 different players have earned 191 first or second team All-ACC honors since Clemson first fielded a men’s soccer squad in the 1967 season. The 191 All-ACC selections is the most honors by an ACC school.

The Tigers are now 7-8-2 overall, while Boston College is 9-6-2 this season. Clemson is led in scoring by Michael Brooks with six goals and one assist for 13 points. Hassan Ibrahim is the Tigers’ second leading scorer with four goals and four assists for 12 points.

This will be the fifth meeting between Clemson and Boston College on the soccer field. Clemson leads the overall series 2-1-1. The Tigers and Eagles first met in 2005.