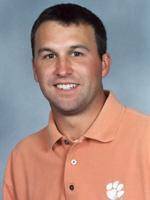 Delahoussaye and Duncan are wrapping up their summer schedule this week at the Palmetto Amateur, while Ferguson, along with Martin Catalioto will travel and compete in the U.S. Amateur, held at Winged Foot Golf Club in Mamaroneck, NY next week.

Delahoussaye has had quite an impressive summer, finishing in the top-15 all but one time of every tournament he has played this summer, and Duncan was the medalist at sectional qualifying for the SC State Amateur, and also finished tied for 2nd at the Dogwood Invitational earlier this summer.

Ferguson started the summer with a win at the Sunnehanna Amateur, and was the medalist at sectional qualifying for the US Am, in Raleigh, NC. Martin Catalioto participated in the U.S. Public Links earlier this summer, and is the only Clemson golfer to travel with Ferguson to the US Amateur.

Stroke play will take place on Monday, August 16, and Tuesday, August 17, on both the East and West courses. Following the two days of stroke play, the field of 312 golfers will be reduced to the lowest 64 scorers, who will then advance to match play. All matches are 18 holes, except for the final match, which will be 36 holes, scheduled for Sunday, August 22. All matches will be held on the West Course.

ESPN2 will have 10 hours of live national coverage over the last five days of the Championship.