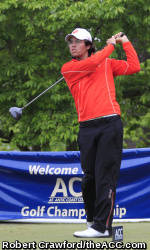 CLEMSON, SC – Clemson golfers Crawford Reeves, Billy Kennerly and Thomas Bradshaw all made the academic All-ACC team for the 2011-12 academic year. It was the first selection for Kennerly, the second for Bradshaw and the third for Reeves.

It marked the first time Clemson has had three academic All-ACC players in the same year. This past semester the team had a 3.23 GPA, highest on record. The team also had a perfect 1000 APR score, the only program at Clemson to accomplish a perfect score according to data released by the NCAA last week.

Reeves joins Ben Martin as the only Clemson golfers to make the team three times. The ACC began selecting an academic All-ACC team in 2006. The marketing major had a strong season on the course and was named to the Ping All-District team.

The native of Greenville, SC finished the year with a 71.62 stroke average, second on the team. He had 10 rounds under par, including five rounds in the 60s. He finished second at the USC-Aiken Invitational when his birdie on the final hole gave Clemson the team championship.

Bradshaw, who won the Rice Planters Amateur last weekend, had a 73.33 stroke average for the season. He also had 10 rounds under par, including seven in the 60s, tied for second on the team. The marketing major led the team in birdies with 111 and led the squad and ranked third in the nation in putting with 28.52 putts/round.

Kennerly made the academic team as a freshman. The Pre-business major had a 72.73 stroke average for the year, and had 16 rounds at par or better, best on the team. The native of Georgia finished in seventh place at the national field at the Puerto Rico Classic and finished in the top 25 in nine of his 11 tournaments.