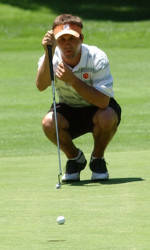 Delahoussaye, an All-ACC golfer for the Tigers in 2004-05, is in third place after two rounds of the RBC Canadian Open at St. George’s Golf Club in Toronto. The native of Greenville, SC shot an opening round 62 on Thursday, tied for the lowest round in the history of the Canadian Open. He added a one under par 69 on Friday and and is one shot behind the leaders entering Saturday’s third round. Delahoussaye is in his first year on the PGA Tour and this was just his fourth made cut of the year.

Stanley shot a second round 71 after an opening round 67 on Thursday and his 36-hole total of 138 is just two shots out of the lead at the Nationwide Tour’s Children’s Hospital Invitational at the Scarlett Course in Columbus, OH. He stands in sixth place overall. Stanley was a two-time first team All-American for the Tigers between 2006-09.

Hoey, a starter on Clemson’s 1999 team with Lucas Glover and Jonathan Byrd that finished eighth in the nation, stands in ninth place after the second round of the Nordea Scandinavian Open in Stockholm, Sweden. Hoey has had consecutive rounds of 70 in the competitive field. His four under par score is five shots back of leader K.J. Choi.