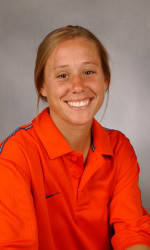 Tatum Clowney, who served as a Volunteer Assistant Women’s Soccer Coach at Clemson last season, has been promoted to Assistant Coach as announced by Head Coach Todd Bramble.

Clowney played at Clemson in the 1998-2001 seasons. She scored 10 goals and had 18 assists for her career. During her career, Clemson went to four NCAA Tournaments, including two final eight appearances, and four final 16 finishes. In 2000, the Lady Tigers finished the season ranked fifth and won the ACC regular season title.

At Clemson, she was named the Most Improved Player in 1999 and was a member of the Region III South Team that won the gold medal in the 2001 Olympic Festival in Chicago, Illinois. She was also a member of the National “B” team player pool in 2001.

At Clemson she received ACC Honor Roll aclaim four times and graduated with honors in 2002 with a degreee in Elementary Education. She also received the ACC Top Six Award for community service.

Before her tenure at Charleston Southern, she spent one year coaching at Converse College during the 2003 season.

Clowney is from Greenville, SC and graduated from Eastside High School. She was named all-state three times during her career and state-player-of-the-year twice.

She has served on the coaching staff for the ODP program for the last three years.

“Everyone that goes through the program considers Clemson their second home,” said Clowney. “When I came back to Clemson last fall, it was like coming home again. I appreciate the opportunity Coach Bramble has given me. The athletic department, the university, and the facilities at Clemson are second to none, and I am glad to be part of this program. When I came back to Riggs Field last fall, it was as if I never left. Clemson is a special place, and it’s where I want to be. Last fall was exciting as we advanced to the Elite Eight in the NCAA Tournament. The level of play in the ACC is unmatched as we have the best teams in the nation. I look forward to this fall and this opportunity to work with the Clemson program.”