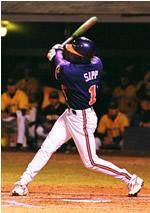 Junior righthander Garry Bakker scattered seven hits over 7.0 scoreless innings pitched to lead #10 North Carolina over Clemson 4-0 Saturday afternoon in front of a season-high 2,225 fans at Boshamer Stadium. With the win, the Tar Heels evened the series 1-1 and improved to 27-9 overall, including 9-5 in the ACC. The Tigers fell to 21-14 overall, 7-4 in ACC play. It was the first time in 2004 that Clemson was shut out. It was also the first time an ACC team shut out the Tigers since May 6, 2002, when Georgia Tech blanked Clemson 11-0 in Atlanta, GA.

Bakker (3-3) allowed nine Tiger baserunners, but worked out of several jams to earn the win. Michael Gross pitched the final 2.0 innings, allowing one hit and one walk to earn his third save of the year. The Tar Heels did an outstanding job limiting the Tigers with runners in scoring position, as they were 1-for-9 in that situation. The Tigers’ only hit with runners in scoring position was an infield single by Travis Storrer that did not score a run. Robert Rohrbaugh (2-2) took the loss despite allowing two just runs in 6.1 innings pitched.

The Tigers squandered an early scoring opportunity . In the third inning, Tony Sipp and Garrick Evans led off with singles, but Sipp was picked off second by catcher Chris Iannetta after the first pitch to Herman Demmink. Demmink and Kris Harvey then grounded out to end the inning.

The Tar Heels returned the favor in the bottom of the third inning. Wes Moyer led off with a double to left-center. After Craig Corrado flied out to center, Greg Mangum singled to right, but Moyer was held up at third by Head Coach Mike Fox. Catcher Robert Rohrbaugh got Bryan Steed to pop up to end the inning.

North Carolina finally broke through in the fourth inning with a run. Rohrbaugh’s full count pitch to Iannetta just missed the outside corner, and Marshall Hubbard followed with a sharp single through the right side. After Ross Cook sacrificed the runners up a base, Jay Cox drove home Iannetta with a soft single to right field. Blair Waggett then grounded out on a bunt, moving Cox to second base, but Hubbard did not score from third. The Tigers elected to intentionally walk Moyer to load the bases with two outs. Then Corrado flied out to left-center on a 2-0 pitch up in the zone to end the inning.

Clemson wasted another opportunity to get on the board in the fifth inning. Leadoff line-drive singles by Sipp and Evans put runners at first and third with no outs. But Demmink struck out swinging and Harvey grounded into an inning-ending double play. The throw from second base just beat Harvey at first base. Through five innings, Clemson had seven hits, but no runs on the scoreboard.

Corrado got things started for the Tar Heels in the seventh inning with a leadoff single. Entering the at-bat with a .136 batting average on the season, he grounded a slow roller up the middle for a base hit. After Mangum popped up for out #1, Bryan Steed sacrificed Corrado to second base. Reliever Josh Cribb then threw a wild pitch, as Corrado advanced to third, and walked Iannetta on four pitches. Then on a 1-2 count, Hubbard lined a double to left-center to score Corrado from third and Iannetta from first. Evans’ relay throw was to second base instead of the cut-off man, enabling Iannetta to score uncontested.

North Carolina added to its lead in the eighth inning. Cox reached on a fielding error by Russell Triplett. After Cribb retired the next two batters in order, Carrado singled through the left side. Then Mangum lined a one-hopper to Demmink at second, but the ball took a high hop, allowing pinch-runner Mell Adams to score an unearned run.

Sipp and Evans, the last two Tigers in the batting order, each had two hits and combined for four of the team’s eight hits. Storrer also had two hits for Clemson. Hubbard, Cox, and Corrado all had two hits apiece to lead the Tar Heels. North Carolina’s 11 hits broke the Tigers’ 12-game streak of not allowing double-digit hits.

The two teams will wrap up the three-game series Sunday at 1:30 PM.