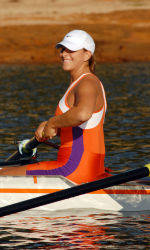 CLEMSON, SC–Clemson’s Suzanne Van Fleet earned a Bronze Medal in the Women’s 8+ at the Under 23 World Rowing Championships.

“The conditions were better at the start and worsened down the course. We fought the whole way through, it was a really good effort,” said Suzanne Van Fleet.

“It is a great honor to represent your country and Suzanne has shown a great deal dedication throughout the process,” said Clemson Head Rowing Coach Richard Ruggieri. “I look forward to reinforcing the lessons learned this summer in training, racing and team development.”