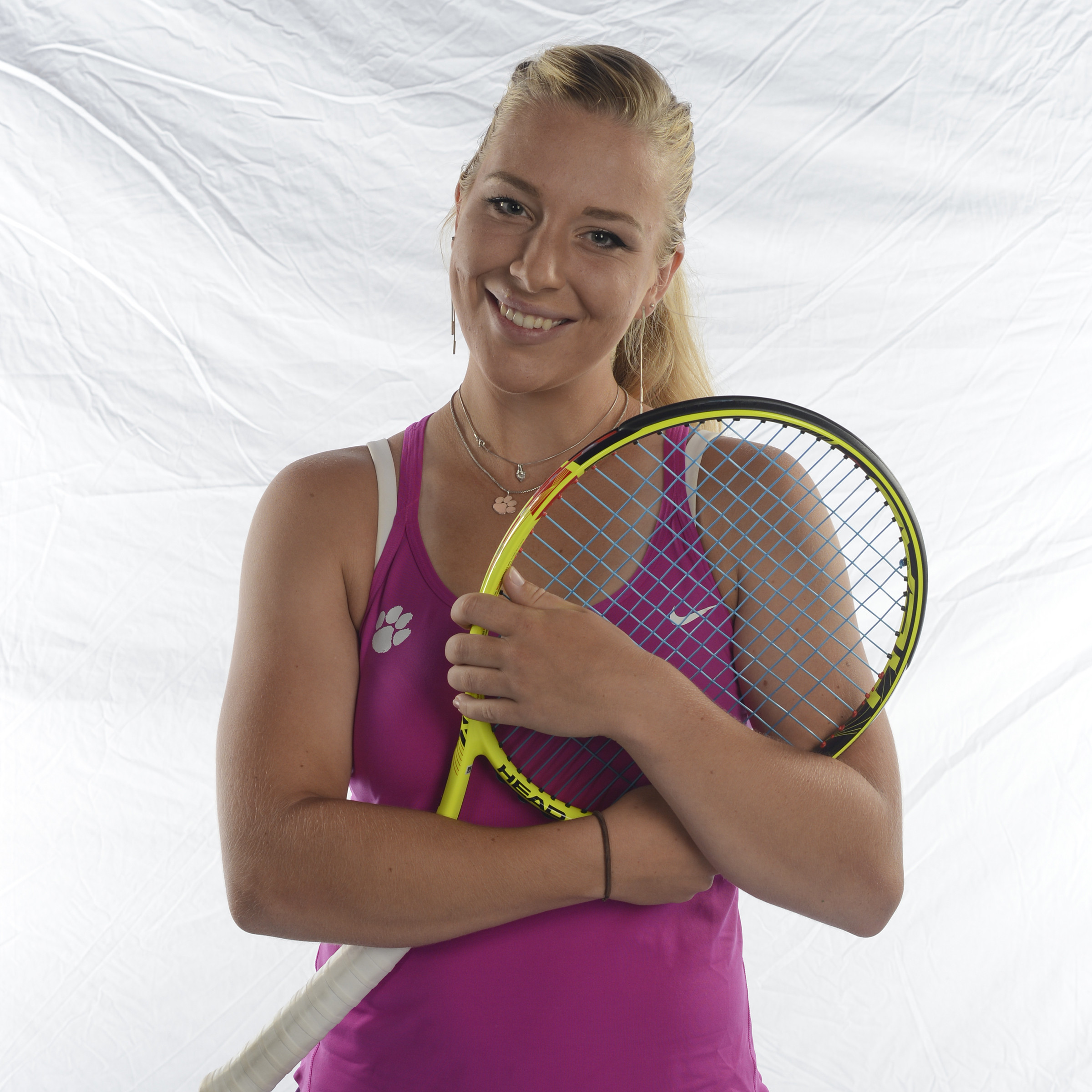 When Joana Eidukonyte was four, she watched her father take her five-year-old brother through various tennis drills as he began to learn the game, and she was eager to try it herself. Since that moment, Eidukonyte has been playing tennis, and she does not plan to stop anytime soon.

“Apparently, the coach gave me a racket and I started to play,” she said. “I cannot imagine that picture of myself, because at that time, I was probably the same size as the tennis racket.

“After the coach saw me play, he told my dad I might make something of myself if I keep playing. Since then, I have never stopped playing tennis.”

From that point on, she thrived on the hardcourt, and she eventually decided to take her talents beyond the high school level. Hailing from Vilnius, Lithuania, she believed that it was time to experience something outside of her home country. Education was also a factor in her decision to play collegiate tennis.

“Some of my friends attended universities abroad and liked it. I knew that education was an important asset, and I decided I wanted to study and play tennis at the same time.”

When deciding where to attend college, Eidukonyte was sold on Clemson by former assistant coach Scott Kidd even before arriving on campus. Once she took an official visit, she fell in love with the campus.

“I loved the family atmosphere of Clemson. Everyone was exceptionally nice. The campus reminded me of my home, with lots of trees and green everywhere. It’s such a beautiful place. I was shocked when I first saw Death Valley. It was so big and I kept staring at it during my official visit because you could practically see it from anywhere.”

Life in the United States flew by for Eidukonyte early on. She admitted that it was a bit overwhelming at first, but she credits her teammates for helping her feel at home.

“Adjusting to life in Clemson was not as hard as I expected because I had my teammates who helped take care of me. Without them, my time in Clemson would not have been as fun. Especially Carola (Pederzani), who is from Italy. She has been like a sister to me during the time I have been in the U.S.”

When it came to playing tennis overseas, Eidukonyte mentioned how different the atmospheres were, and it is an aspect that she has come to love during her time in Tigertown.

“College tennis is different from what I was used to. It’s the same sport, of course, but the atmosphere is completely different. Here, the crowd and even the players scream their hearts out during the match.

“At first, I was surprised and uncomfortable with it, but as time passed, I became part of this ‘culture.’ Now, I’m doing those things I never would have imagined myself doing on the court.”

Heading into her final year, she still sees herself as a work in progress and looks to accomplish more in 2015-16.

“There is no one key to success, but there are many things that contribute to it. Work ethic is one. For a student-athlete, it is hard to juggle academics and athletics, and finding that happy medium was important.

“Teamwork is another, and one that I’m still working on. Tennis, by nature, is an individual sport. You’re not relying on anyone else to win that point or make that shot. College tennis is very much a team sport, and, although I believe I have improved, I still have to work on being more team oriented.”

Through all of the matches, training and experiences, Eidukonyte gives the credit back to her father for introducing her to the sport and helping mold her into the player she is today.

“My dad was always there for me. He was, and is, my coach who dedicated his precious time to me. I am grateful for that. The training was harsh, but I believe there wouldn’t be any better way for me to play tennis. I want to give back something to the person who always believed in me.”

Eidukonyte has thought about staying in America to pursue a master’s degree in kinesiology or returning to Lithuania to pursue a professional tennis career. No matter what path she chooses, her love of tennis will never leave her.