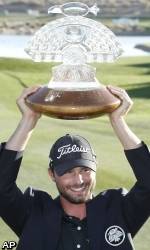 CLEMSON, SC – Former Clemson All-American Kyle Stanley overcame an eight-shot deficit entering the final round and won the 2012 Waste Management Phoenix Open. Stanley had a 72-hole score of 269, a 15-under par score on the par 71 TPC of Scottsdale Course.

On Sunday, in shooting a 65, Stanley had six birdies and 12 pars. He hit 16 of 18 greens, giving him 57 of 72 greens for the week. He won by one shot over Ben Crane, who shot a 66 on Sunday and finished with a 270 score. Spencer Levin, who had a six-shot lead on the field, including eight shots over Stanley entering the final round, finished third at 13-under-par 271. Stanley was tied for fifth at nine under par entering the final round.

Former Clemson All-American D.J. Trahan shot a 66 on Sunday and finished fourth with a 272 score. Trahan had a 64 on Saturday and his 130 score was the best in the tournament on the weekend, even four shots better than Stanley.

Stanley has been the story of professional golf so far this year. He had a five-shot lead entering the final round of the Farmer’s Insurance Open in San Diego last weekend, and had a seven-shot lead in the middle of the final round. But he made an eight on the last hole, then lost in a playoff to Brent Snedeker.

But, one week later Stanley was in the winner’s circle holding a check of more than $1 million.

With Stanley’s victory, a former Clemson golfer has won at least one tournament on the PGA Tour each of the last nine years, the longest active streak for any school. Arizona State and UNLV could tie the Tigers if one of their former players wins an event later this year.

Stanley’s win will give him an invitation to the Masters in April. That will give Clemson four players in the Masters for the first time. Lucas Glover qualified earlier by virtue of his 2009 US Open Championship. Jonathan Byrd had already qualified by his top 30 finish on the Fed Ex Cup list last year. Current Clemson golfer Corbin Mills received an invitation by winning the 2011 US Public Links Championship.

Stanley is the youngest former Clemson golfer to win a PGA event. Born on November 19, 1987, Stanley is 24 years, two months and 17 days. Jonathan Byrd was the previous youngest former Tiger to win on the Tour. He was 24 years and nine months when he won the 2002 Buick Challenge.

Stanley was an All-American at Clemson between 2006-09. He was a first-team All-American as a freshman and a junior when he finished second at the NCAA Championships both years. He helped Clemson to a number-five national team finish in 2008, his sophomore year.