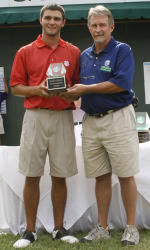 Clemson, SC – Clemson junior Kyle Stanley won the 2008 Carpet Classic by five shots on Sunday, helping the Tigers to a fourth-place team finish. Stanley fired a final round 69 to finish at eight-under par for the event that was held on the par 72 course at The Farm in Dalton, GA.

This was the first individual tournament win by a Clemson golfer since Stanley won the Purdue Aloha Classic in Honolulu, HA in November of 2006. Stanley is the fourth Clemson player to win the Carpet Classic, as he joins Danny Ellis (1992), Lucas Glover (1997), and D.J. Trahan (2001) as former champions of the fall tournament.

Stanley began the tournament with a 73, then shot a six-under par 66 on Saturday when he did not make a bogey. He got off to a slow start on Sunday and was two-over-par for the day through 11 holes. At that point he was one shot off the lead, which was held by Georgia Tech’s David Dragoo.

But, the native of Gig Harbor, WA played the last seven holes in five-under-par to record the five-shot victory over Jonathan Hodge of Chattanooga and Allen Koon of South Carolina. The key hole was the 12th, where Stanley made an eagle three. Stanley made just one eagle all of last year. He then made birdies on the 13th, 15th and 18th holes to finish with a three-under par 69 for the day. His birdie on the 18th hole allowed Clemson to finish fourth as a team, one shot ahead of Florida. Stanley led the 90-player field with a nine-under-par score on the par five holes. He was two under on the par four holes. He had 14 birdies for his 54 holes, second best in the field.

It was quite a turnaround from last year for Stanley, who finished 72th at the 2007 Carpet Classic with a career worst 233 score on the same course. Last year, Stanley was attempting to play the tournament just a couple of days after returning from the Walker Cup, which was played in Europe. He didn’t have much time to recover. But this year he was well rested.

UT-Chattanooga won the event with an even par team score of 864. Tennessee was second at 869, while South Carolina was third at 870. Clemson was fourth at 872 and Florida was fifth at 873. Eighth-ranked Alabama was sixth at 875 and third-ranked Georgia finished seventh at 876. Clemson was the top ACC team in the field of 18 teams. Wake Forest finished 10th to rank as the second best school from the conference. It was a strong field with 10 top 20 teams. Clemson defeated six of those top 20 teams.

Freshman David May was Clemson’s second best player for the tournament with a 221 score and a 33rd place finish, but he had a 79 on Sunday and was the non-counter. Sam Saunders shot a 78 on Sunday and finished at 223. Phillip Mollica had a 74 on Sunday to finish at 228.