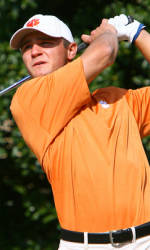 Stanley to Compete in Arnold Palmer Invitational This Weekend

Clemson junior Kyle Stanley will compete in the PGA Tour’s Arnold Palmer Invitational March 26-29 at Bay Hill Golf Club in Orlando, FL. It will be the third PGA Tour event for the Clemson junior, who leads the Tigers in stroke average with a 71.44 figure so far this year. Stanley received an invitation to the event by virtue of his Southern Amateur victory last summer.

Stanley will be one of three golfers with ties to Clemson in the field, as Lucas Glover and D.J. Trahan also will compete. Stanley’s career stroke average of 71.66 is second in Clemson history trailing only the 71.49 by Trahan, who played at Clemson from 1999-03, including the national championship in the spring of 2003.

Stanley qualified for the 2008 United States Open at Torrey Pines in San Diego, CA and shot a 150 for the two rounds to miss the cut by just one shot. He was the first active Clemson golfer to play in the United States Open since 1990 when Chris Patton played in the US Open after winning the 1989 United States Amateur.

Stanley qualified for the 2008 United States Open by shooting a 36-hole score of 137 on two courses in Columbus, OH on June 2. That was just two days after he finished seventh at the 2008 NCAA Championships with a 296 score. He led the Tigers to a number-five NCAA team finish, Clemson’s best NCAA team finish since winning the championship in 2003.

Stanley fired rounds of 72-78 at the United States Open for a 150 total and missed the cut by just one shot. He was tied for 78th for the two rounds. He would have made the cut had Stuart Appleby not made a 40-foot birdie putt on the last hole at the conclusion of the second round.

Stanley will make his second appearance at the Arnold Palmer Invitational, as he played in the 2007 event after winning the 2006 Southern Amateur. He shot rounds of 75-74 and missed the cut.

The field at the Arnold Palmer Invitational this weekend includes Tiger Woods, who has won the tournament five times, including last year when he sunk a 25-foot birdie putt on the last hole to win by one shot.