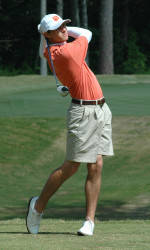 Clemson, SC – Clemson golfer Kyle Stanley is ranked number-one in the latest Golfweek National Amateur rankings. The rankings take into account player performances in national amateur events over the last 52 weeks. The only college event included in the ranking is the NCAA National Championship.

Stanley is the first Clemson golfer to rank number-one in the Golfweek Amateur rankings since D.J. Trahan held the number-one position in 2003. The sophomore in 2007-08 has a five-point lead (225) over Dustin Johnson of Coastal Carolina (220), who has won two national amateur events in recent weeks, including the Northeast Amateur in Rumford, RI last weekend. Veteran amateur Trip Kuehne is ranked third, while Webb Simpson (Wake Forest) and Chris Kirk (Georgia Tech) are tied for fourth. Billy Horschel, a first-team All-American from Florida, is sixth.

Stanley is the only current Clemson golfer ranked in the top 50. Tanner Ervin, who will be a senior in the 2007-08 Clemson team, and Ben Martin, who made first-team All-ACC as a freshman in 2007, are tied for 74th. David May, Sam Saunders and assistant coach Jordan Byrd are tied for 126th.

Stanley finished fourth at the 2007 Northeast Amateur golf tournament at Wannamoisett Golf Club in Rumford, RI on June 23. It was the third top 30 finish for Stanley in a major summer amateur event in the last three weeks. He finished 11th at the Sunnehanna Invitational two weeks ago with a 282 score, then finished 28th at the Monroe Invitational last week with a 289 score. Stanley also finished second at the NCAA National Tournament in May.

Stanley won both the Sahalee Amateur in Washington and the Southern Amateur in Birmingham, AL last summer, two victories that count towards his point total in the latest rankings. Stanley will not be in action this week at the Dogwood Invitational in Atlanta, as he takes his first week off from competition since the end of Clemson’s season.

Clemson will have three current players competing in the Dogwood Invitational at Druid Hills Golf Club in Atlanta Wednesday through Saturday this week. Ben Martin are all in the field. To follow the scores this week go to the internet site, thedogwood.com.