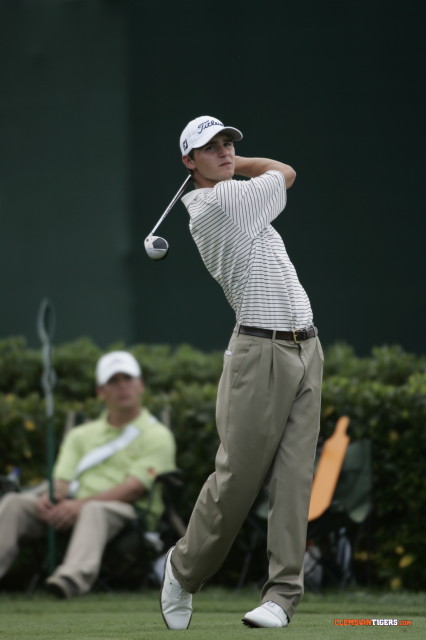 Clemson, S.C.—Former Clemson All-American Kyle Stanley made the cut at the 2018 Masters with a round pf74 on Friday. Current Clemson sophomore Doc Redman had a second round 77 and missed the cut.

Stanley has had rounds of 72 and 74 for a 146 total through 36 holes and is tied for 28th place in the field of 87 golfers. He is one of 53 golfers who made the cut, which was at five over par 149. Stanley is the 11th golfer with ties to Clemson to make the cut out of 28 total competitors.

Redman had rounds of 76-77 to finish with a 153 total, four shots above the cutline. For the second straight day Redman shot a one over par 37 on the front nine and he was at five over par heading to the back nine. Like Friday the native of Raleigh, NC had two birdies on the front, this time on the par three sixth hole and the par four ninth hole.

But, like Thursday’s first round, Redman struggled on the 10th and 11th holes. He had a double bogey on the 11th after a birdie on 10. He played holes 8-11 on Thursday at three over par.

Redman’s dream of making the cut went by the boards on the 15th hole when he made a double bogey seven after hitting ball over the green in two, then hitting the ball in the water on his third shot.

Redman did finish strong with a birdie on the par four 18th hole. He hit his approach to 10 feet, then made the putt. He finished his 36 holes at August with five birdies, 19 pars, 10 bogeys and two double bogeys.

Redman finished tied for 69th in the field overall, he was tied for second among the six amateurs.

Stanley, who played for the Tigers from 2006-09 and finished second at the NCAA Tournament twice, is the first former Tiger to make the cut at the Masters since Lucas Glover in 2014. Glover made that cut with a 144 total before finishing 42nd.

Like Redman, Stanley double bogeyed the 15th hole, then finished strong with a birdie on the 18th. Stanley hit his approach on the 18th hole to within two inches of the hole. Stanley finished with five birdies, 25 pars, five bogeys and one double bogey for his first 36 holes.

Stanley has been among the best on tour this year in hitting greens in regulation and he is second in that category through 36 holes, hitting 28 of 36 greens.

Stanley made the cut in his second Masters appearance. He missed the cut in 2012 after rounds of 75-76. Stanley will play tomorrow with Francisco Molinari of Italy at 11:50 a.m.