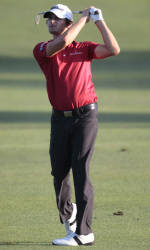 Stanley Has Lead Entering Final Round of Farmers Insurance Open

CLEMSON, SC – Former Clemson golfer Kyle Stanley shot a third round 68 on Saturday and has a five-shot lead with an 18-under par 54-hole score entering the final round of the Famer’s Insurance Open at Torrey Pines Golf Club in La Jolla, CA. Stanley has a five-shot lead over John Huh and John Rollins, who are both at 13-under-par. Former Wake Forest star Bill Haas is at 12-under-par.

Stanley had five birdies and a bogey on Saturday in firing his four under par 68. He had opened the tournament with a 10-under par 62 on the North Course at Torrey Pines, tying for the lowest round by a former Clemson golfer on the PGA Tour.

“It was a good day because I stayed patient,” said Stanley after the round. “I had a great time out there and I was able to play relaxed. I am in a good place right now and I need to just keep doing what I am doing.”

With a five-shot lead entering the final round, Stanley has a chance for the largest victory margin by a former Clemson golfer on the PGA Tour. D.J. Trahan won the 2008 Bob Hope Chrysler Classic by three shots over Justin Leonard. Former Clemson golfers have won 12 PGA tournaments over the years and five have been recorded in playoffs, including each of the last three.

Stanley is in his second full season on the PGA Tour. Last year he finished 55th on the money list with over $1.5 million in earnings. He made 22 cuts in 28 events and finished in the top 25 nine times last year. He made more cuts and had more top 25 finishes than any other former Tiger on the PGA Tour last year.

If Stanley wins in his 43rd career tournament it will be the second earliest victory among former Tigers on the PGA Tour. Jonathan Byrd won in his 33rd event on the PGA Tour during his rookie year of 2002.

Stanley, who is 24-years-old, will have a chance to break the Farmer’s Insurance Tournament record of 266, 22-under-par. Tiger Woods had that score in 1999 and George Burns in 1987.

A victory by Stanley on Sunday would also mean Clemson has had a former golfer win a PGA Tour event nine consecutive years, the longest active streak for any school. UNLV and Arizona State can tie Clemson this year if they have an alum win an event this year.

Stanley was a three-time All-American at Clemson including first team as a freshman and junior in 2007 and 2009 respectively. He won the 2009 Ben Hogan Award.