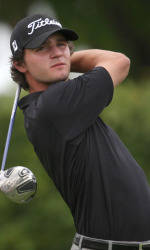 Clemson, SC – Clemson golfer Kyle Stanley shot an opening round one-over-par 72 at the NCAA Golf Championships at Inverness Golf Club in Toledo, OH. Stanley is in a tie for 16th place in the 156-player field after 18 holes. The individual champion will be crowned Thursday after the third round.

Stanley had a consistent round with two birdies, three bogeys and 13 pars on the par 71 course. He is just three shots off the lead held by Jonathan Bowers of Northwestern, Scott Langley of Illinois and Matt Hill of NC State who all had solid rounds of two under par 69. Hill played with Stanley in an afternoon round on Tuesday.

Stanley, who will turn professional after the US Open in June, is trying to become the first Clemson golfer in history to finish in the top 10 of three different NCAA national tournaments. He finished second as a freshman and seventh last year.

“I hung in there overall,” said Stanley, who has a 71.22 career stroke average in nine NCAA national tournament rounds, the best in Clemson history. “I got off to a slow start with a bogey on the first hole and didn’t really hit a stride until the back nine. I just didn’t have many birdie opportunities because I didn’t drive it in the fairway as often as I should have.”

Stanley found the fairway on just seven of the driving holes on Tuesday. But, he did birdie two of his last three holes to gain momentum entering the second round. “I took the bunkers out of play with a long drive on the 16th hole. I was just 62 yards from the flag (on the 409 yard hole) and hit my second shot to within five feet.” He made that putt and then made an 18 foot putt for birdie on the 18th to finish the round.

Stanley will have a morning tee time on Wednesday. “I hope the wind won’t be as strong on Wednesday morning. But, I don’t know where the pins will be so that could make it tougher. Driving the ball in the fairway will be important. You can score on this course if you find the fairway on a consistent basis.”