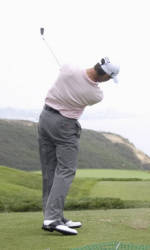 Stanley Fires Opening Round 72 at US Open

Clemson, SC – Clemson sophomore Kyle Stanley fired an opening round one-over-par 72 on Thursday in his first United States Open appearance. Stanley was tied with among others, number-one ranked Tiger Woods through the first 18. The event is being played at the par 71 Torrey Pines Golf Course in San Diego, a layout that is 7643 yards long, the longest US Open Course in history.

Stanley’s 72 was the best by a current or former Clemson golfer in his first US Open round since Jonathan Byrd shot a 69 in his first ever US Open round at Medinah in Illinois in 2003. Stanley played three shots better than the average for players who were in the morning wave of golfers.

Stanley is just the second current golfer to play in the United States Open. Chris Patton played in the 1990 tournament prior to his senior year after winning the US Amateur in August of 1989. Patton shot rounds of 74-72 at the par 72 Medinah Country Club course in 1990.

Stanley started off slowly with a bogey on the par-four second hole, but he came back with a birdie on the difficult 488 yard par-four fourth hole. He then made his only double bogey of the day on the par-4 sixth hole that is 515 yards in length, the longest par four in US Open history.

After four consecutive pars, Stanley played the 11-13 holes in one under par. That is one of the most difficult stretches on the course. Stanley made birdie on the 221-yard par three 11th hole, made bogey on the 504-yard par four 12th, then came back with a birdie on the longest hole on the course, the par five 614-yard 13th.

Stanley then made pars the remaining five holes to finish with a 35 on the back nine, one under par.