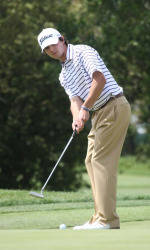 Clemson, SC-Clemson junior golfer Kyle Stanley shot an opening round 72 at the Arnold Palmer Invitational Presented by Mastercard on Thursday in Orlando, FL. Stanley stands in 57th place in the 120 player field. If he ranks in the top 70 after Friday’s second round he will make the cut for the weekend. As an amateur, Stanley is not eligible to receive any money if he makes the cut.

Stanley is playing in his third PGA event, the most by a current Clemson golfer since Chris Patton played in four tournaments in 1990. No Clemson golfer has made the cut at a PGA Tour event since Patton made the cut and finished 39th at the 1990 Masters. He shot a 149 for two rounds at the 2007 Arnold Palmer Invitational. He received invitations to the event by virtue of his victories in the 2006 and 2008 Southern Amateur.

Stanley got off to a great start on Thursday, as he made two birdies within his first six holes and was tied for the lead at two under par. But he made a double bogey on the 16th hole to fall back to even. Stanley finished with three birdies, three bogeys and a double bogey for his two over par 72.

Stanley is one of three golfers with ties to Clemson in the field. Former Clemson All-Americans D.J. Trahan and Lucas Glover both had rounds of 71 and are tied for 41st after the first round.