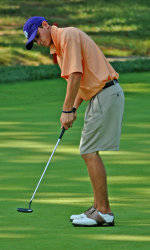 Clemson, SC – Clemson freshman Kyle Stanley will compete as an individual in the 2007 NCAA National Golf Championships at the Golden Horseshoe in Williamsburg, VA this week. Action in the four-day 72-hole event begins on Wednesday. Stanley has a 2:05 tee time for the opening round and 8:55 AM for Thursday’s second round.

Stanley qualified for the championships with his third-place individual finish at the NCAA East Regional at the Golf Club of Georgia, May 17-19. He was Clemson’s top golfer in 2006-07 with a 71.26 stroke average, the best in Clemson history for a freshman and seventh best overall. He finished in the top 20 individually in every one of his nine tournaments, including third place at the ACC Tournament and third place at the NCAA Regional.

This will be Stanley’s second tournament this academic year at the Golden Horseshoe in Williamsburg. He had rounds of 74-69-69 for a two-over-par 212 and an 18th place finish at the Ping Preview October 2-4.

The native of Gig Harbor, WA is ranked eighth in the nation in the Sagarin/Golfweek individual singles rankings. In addition to his accomplishments on the course, Stanley was named to the academic honor roll for the second semester.

Stanley will be striving to become just the second Clemson freshman to finish in the top 10 at the NCAA national tournament. The best finish by a Clemson freshman at the national tournament is an eighth-place finish by Danny Ellis in 1990 at the Innisbrook Golf and Tennis Resort in Tarpon Springs, FL. No Clemson golfer has finished in the top 10 since D.J. Trahan finished eighth in the 2002 tournament at Ohio State.