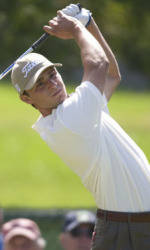 Clemson, SC–Clemson All-American Kyle Stanley advanced to the quarterfinals of the North-South Amateur at Pinehurst #2 in Pinehurst, NC on Thursday. The rising senior gained two victories on Thursday and could be headed to a semifinal matchup with Walker Cup teammate and Southern California All-American Jamie Lovemark.

Stanley defeated Clark Klassen in the morning round by a 6 and 5 score. He then defeated Jonathan Hodge 1 up. The second match was thrilling. Stanley took a four up lead through 11 holes thanks to three consecutive birdies on holes 9-11. He still had a four up lead with four to play.

But, Hodge, a member of the Chattanooga golf team, won the 15th, 16th and 17th holes with consecutive birdies. Stanley needed to at least halve the 18th hole, but he hit his second shot over the green. Hodge had a 15-foot putt for birdie. Stanley hit his chip to within 10 feet, then Hodge missed his birdie putt. Stanley then calmly made the 10 footer for par and the victory.

Stanley will face North Carolina sophomore Kevin O’Connell on Friday in the quarterfinals. He is attempting to be the second consecutive Clemson golfer to win the North-South Amateur. Last year teammate Phillip Mollica won the event.

Jacob Burger, who will be a freshman at Clemson in the fall, lost to Patrick Rada in second round action Thursday morning.