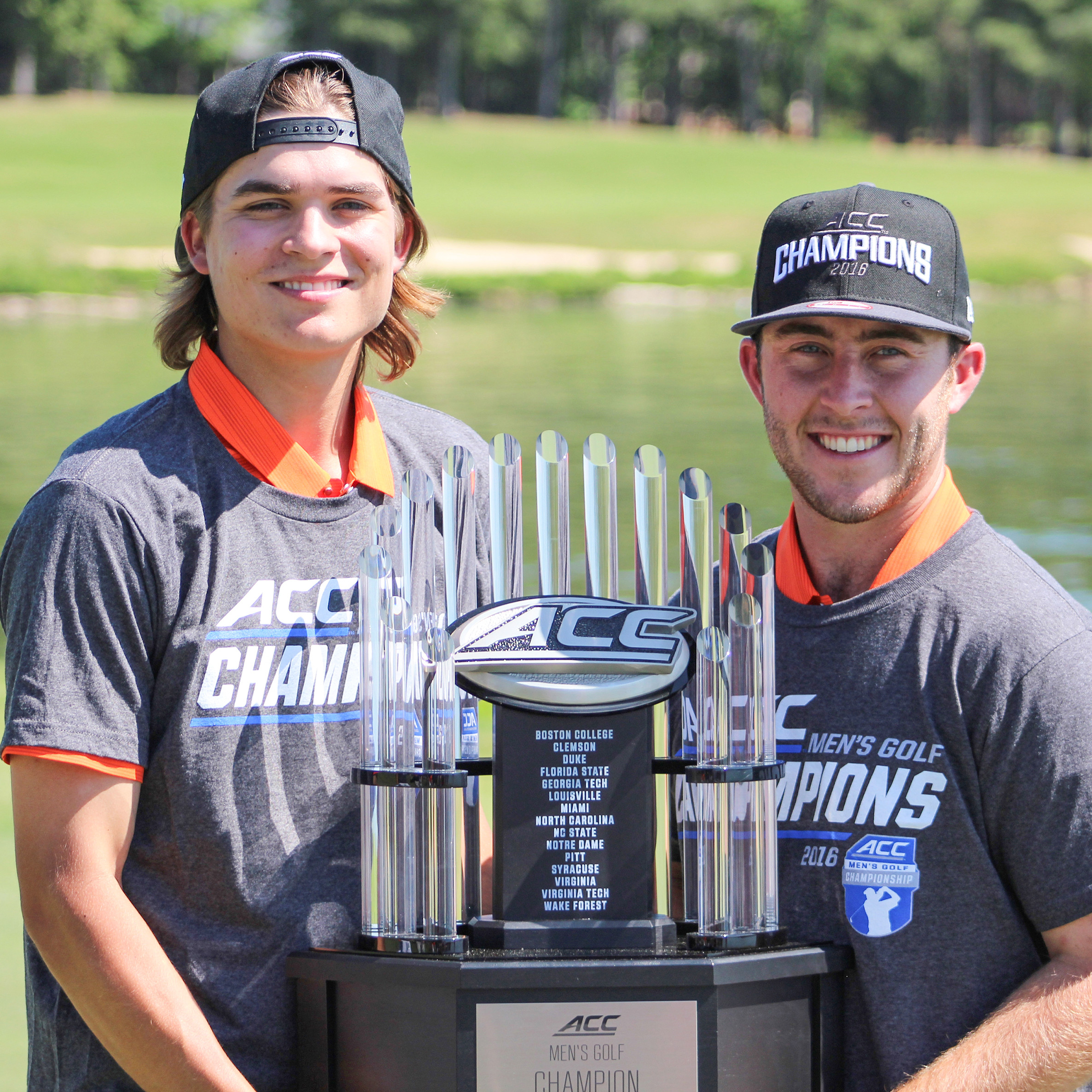 If Larry Penley was asked to name the least stressful and least amount of money he has spent for a recruiting class in his 34 years as Clemson’s head golf coach, he could give a quick answer.

“Carson Young and Austin Langdale of Pendleton, S.C.,” would be his response.

The leaders of the 2016-17 golf team grew up in the shadow of the Clemson campus and were exposed to the tradition and success of the school’s program at a very early age. Young and Langdale got their start in golf as kids at nearby Boscobel Country Club, the practice home of many great Tigers over the years.

“We watched Carson and Austin from the time they were three feet tall,” said Penley with a laugh. “And they were watching us.

“From the time they were kids, they would watch our players practice at Boscobel because that is where they played all the time growing up. They both came from Clemson families, so we have known about them and they have known about us forever.”

Both Young and Langdale had outstanding high school careers and junior careers, so it was natural for them to come in and have an impact on the Tiger program. As freshmen, they both saw considerable action and helped the Tigers to an NCAA Regional berth. As sophomores, they were starters on a team that reached the NCAA National Tournament.

Then as juniors, they were All-ACC players and helped the Tigers to three wins, including the program’s first ACC Tournament title since 2004. The team finished tied for 14th at the NCAA Tournament, its best mark since 2008.

“We have made improvements every year they have been here,” said Penley. “I am really excited to see what is ahead for their senior seasons. They have represented our program so well and are great examples to our younger guys. We have many freshmen and sophomores who will be in the lineup, and they will be terrific leaders for them.”

Young is coming off his best summer, as he shot 30-under par in four events and won the South Carolina Amateur for the second time. Last year, he played in all 11 events and had a 73.39 stroke average.

Capable of going low any day, the Academic All-ACC player had seven rounds in the 60s, including a 68 on the final day of the ACC Tournament, the top round by a Tiger on that Sunday.

Langdale had a 72.2 stroke average last season, second only to All-American Stephen Behr Jr.’s 71.9 average. He earned honorable mention All-America honors and had four top-10 finishes and 13 rounds under par. He finished fourth at the ACC Tournament with a seven-under-par tournament, then finished 15th at the NCAA Regional in Stillwater, Okla.

But Langdale injured his shoulder during the NCAA Tournament, needed summer surgery and missed the amateur schedule.

It has not always been easy for Young and Langdale because they have had injuries along the way. Young has missed time due to a knee injury and Langdale missed the first two tournaments this fall recovering from shoulder surgery.

“I am really hoping for a healthy spring senior season for both of them,” said Penley. “There haven’t been a lot of times when they have both been healthy and both been at the top of their game at the same time.

“That is something I am looking for this spring. I want to see what this team can do when both are healthy and hitting on all cylinders.

“They deserve it because they have both done so much for the program. They have a chance to finish strong together and bring our team to the national tournament and hopefully match play for the first time.”