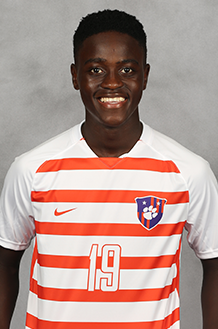 Elton Chifamba will arrive in Clemson as one of the most highly regarded prospects in the 2021 recruiting class… Has earned numerous U.S. Youth National Team call-ups… A standout member of the Columbus Crew SC’s academy system… Recently trained with the Crew’s First Team during its 2021 MLS preseason camp… Has been a regular member of First Team training sessions with Columbus Crew SC… Has been a part of the Crew SC Academy since joining as a U12 player… A four-star recruit according to TopDrawerSoccer.com… Regarded as the best central midfield prospects in 2021… Committed to Clemson on Dec. 22, 2020.

“Elton is someone who we’ve valued for a very, very long time in the recruiting process. You have to give Elton a lot of credit because he wanted to be a Tiger… He’s a young man who is in the mold of what we want in a midfielder in terms of being a two-way player. He likes to defend but is also very good with the ball. I think he’s someone who can come in and contribute right away.”