Doug Kingsmore Stadium, the home of Tiger baseball since 1970, has seen many changes and improvements over the years, but it has not lost its aesthetic beauty and unique feel on the west side of the Clemson University campus.

This outstanding fan support from the Clemson community and upstate of South Carolina has contributed to the Tigers’ outstanding home-field record. Clemson has played at Doug Kingsmore Stadium for 52 years and has a winning percentage of 78 percent. That includes a 413-143 record (.743) in ACC regular-season contests. The Tigers have had a winning record in all 52 seasons at Doug Kingsmore Stadium as well. 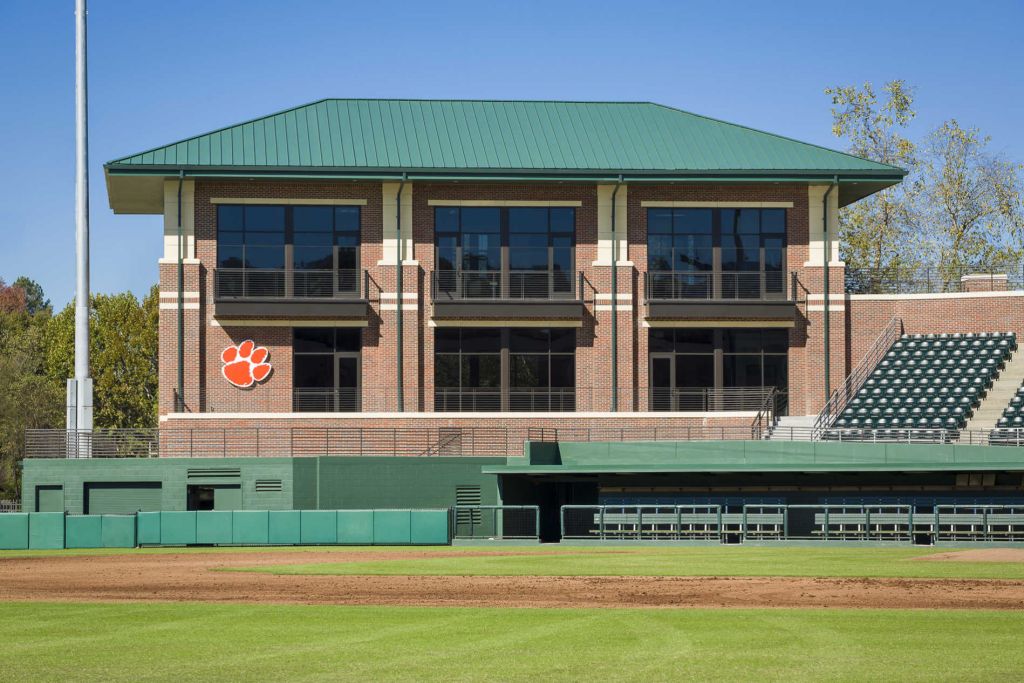 Nine times during the 1994 season, an opposing top-20 team tasted defeat at Doug Kingsmore Stadium, and four times a team ranked in the top three lost to the Tigers. Seven wins against top-20 teams, including three victories over a top-10 Florida State squad, were recorded at home in the 1996 season.

In 2000, the Tigers had an 8-3 record against top-25 foes at home. After Clemson won three games against No. 2 Florida State, Head Coach Mike Martin opined on how tough it is to play at Doug Kingsmore Stadium.

“If you had told me in 1992 that we were going to go to a place where we’d be 2-13 over the next eight years, I would have gone to the administration and suggested we join another conference,” Martin told Tallahassee Democrat. “Clemson is a very tough place to play…the toughest place to play of any place I’ve ever competed in all my years of college baseball. The good news is it’s 727 days before we have to go back to Clemson.” 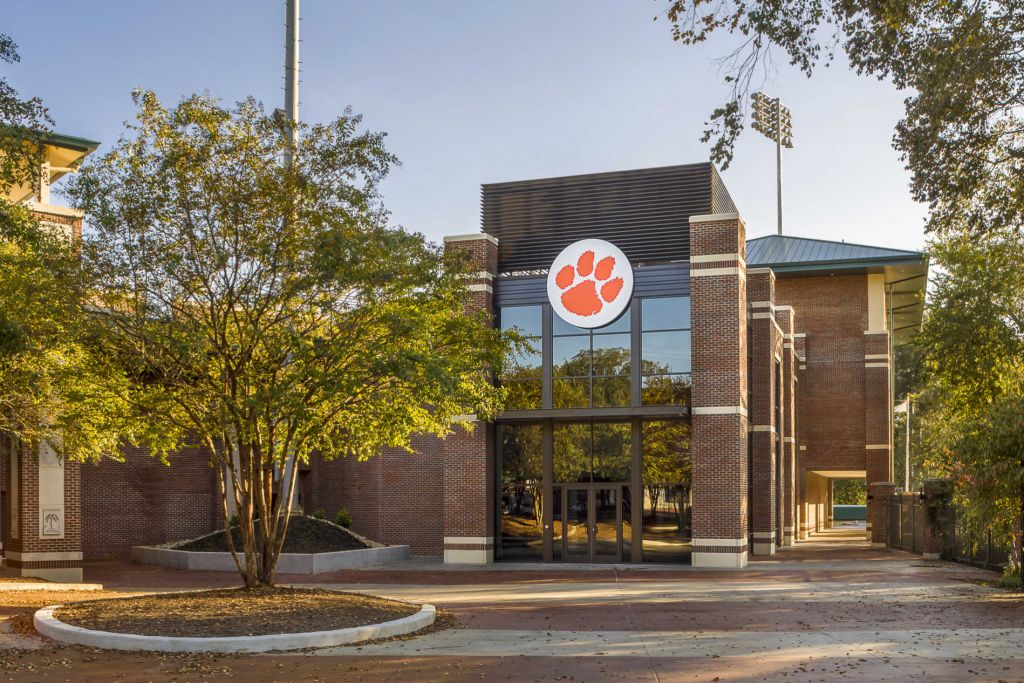 Martin echoed those sentiments after his top-ranked Seminoles salvaged the series with their only win in the finale at Doug Kingsmore Stadium in 2012.

“That was one of the biggest wins of the year for us. I don’t care what anyone says…this is the toughest place that I have had to play a baseball game in all of my years of coaching.”

The renovations began during the summer of 2002, which has kept Clemson’s ballpark among the country’s best. The stadium has a brick façade that surrounds every entrance. A green roof that covers much more of the stands and a press box that is twice as large adds to the comfort of fans attending the game and the media covering it. The press box, which is accessible by elevator, includes four large booths for broadcasting and a separate media center that accommodates up to 18 media members.

There is also a patio area outside the press box that is above the existing stands along the first and third-base lines. The area is used for receptions and other events throughout the year.

Two ticket booths, concession stands with an adjoining picnic area and enlarged restrooms make the facility easily accessible and fan-friendly. A grand stairway leading from the McFadden Building parking lot to the stadium’s main entrance is an added feature from a convenience and aesthetic aspect.

The players also realize improvements, as four batting cages were constructed and recently enclosed with a pitching lab beyond the right-field fence. The dugouts were almost doubled in length and width.

Prior to the 2005 season, PawVision, the videoboard that was used in the football stadium, was moved to Doug Kingsmore Stadium. Prior to the 2008 season, new lights were installed, then a practice facility with field turf was built behind the batting cages in 2009. Additional chairback seats were also added behind the right-field fence. 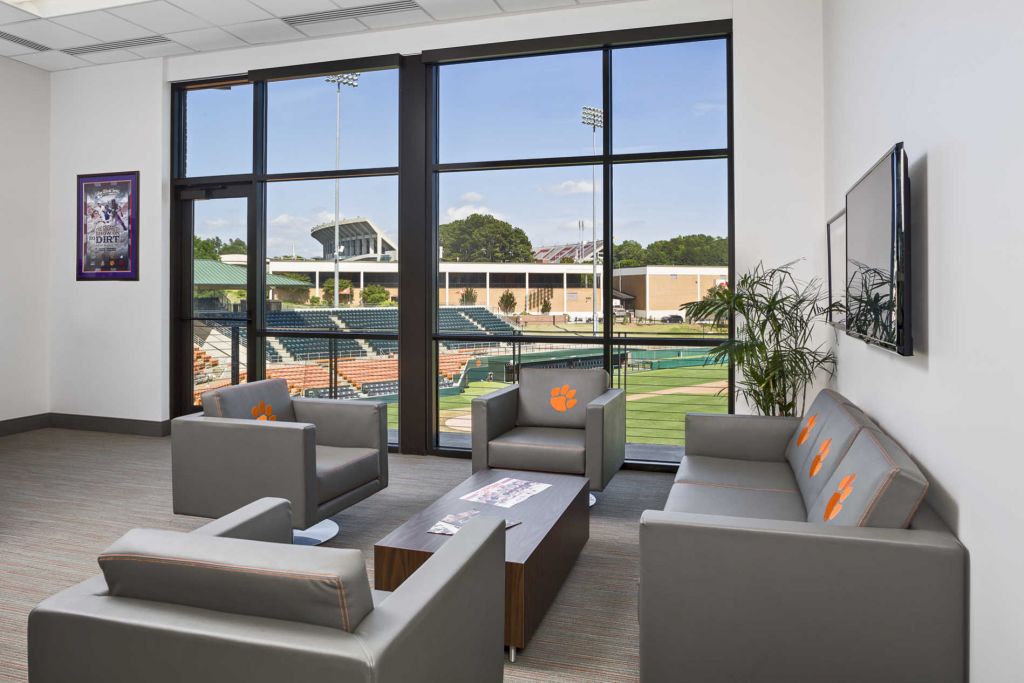 Before the 2010 season, the Thomas F. Chapman Grandstands were built behind the left-field fence, adding 1,000 seats. Chapman, who was a two-time All-ACC pitcher at Clemson (1963-65), gave $2 million to the university, $1 million of which went to the grandstands.

Before the 2013 season, chairback seats were added in the main grandstand, replacing the bleacher seats. The videoboard was upgraded as well. After the 2013 season, the playing surfaced was re-leveled and an upgraded drainage system was installed that can handle multiple inches of rain per hour without pooling of water. Home plate was moved out 10 feet, creating more space behind home plate and shorter distances to the outfield fence.

In 2015, the stadium continued with upgrades, including a new three-story building behind the first-base dugout. It houses a state-of-the-art clubhouse, coaches offices and a player lounge among other amenities. Premium seating was also added behind home plate. In 2016, a berm was created behind the third-base stands and is a favorite among young Tiger fans.

Prior to the 2020 season, the hitting facility was renovated to include state-of-the-art electronics as well as make it fully enclosed for use throughout the winter.

Doug Kingsmore Stadium has over 4,500 permanent seats, but is capable of holding 6,272 fans thanks to a hill area down the left-field line that is popular with the Clemson student-body. The stadium attendance record was set on March 6, 2016, when 6,524 fans saw Clemson defeat No. 18 South Carolina 4-1.

The park features a terrace in the outfield adjacent to the fence, similar to the old Crosley Field in Cincinnati, Ohio, which ironically was torn down the year Doug Kingsmore Stadium was built. Bill Wilhelm, Clemson’s longtime coach who was the skipper when the field was built, liked the look and practicality of a field with grass all the way around the outfield instead of gravel or dirt.

Former MLB catcher Jason Varitek, who played at Georgia Tech in the 1990s, said Doug Kingsmore Stadium was his favorite venue to play at.

“They had rowdy fans. And the fans are right on the action. They were closer to the on-deck circle than we were.” 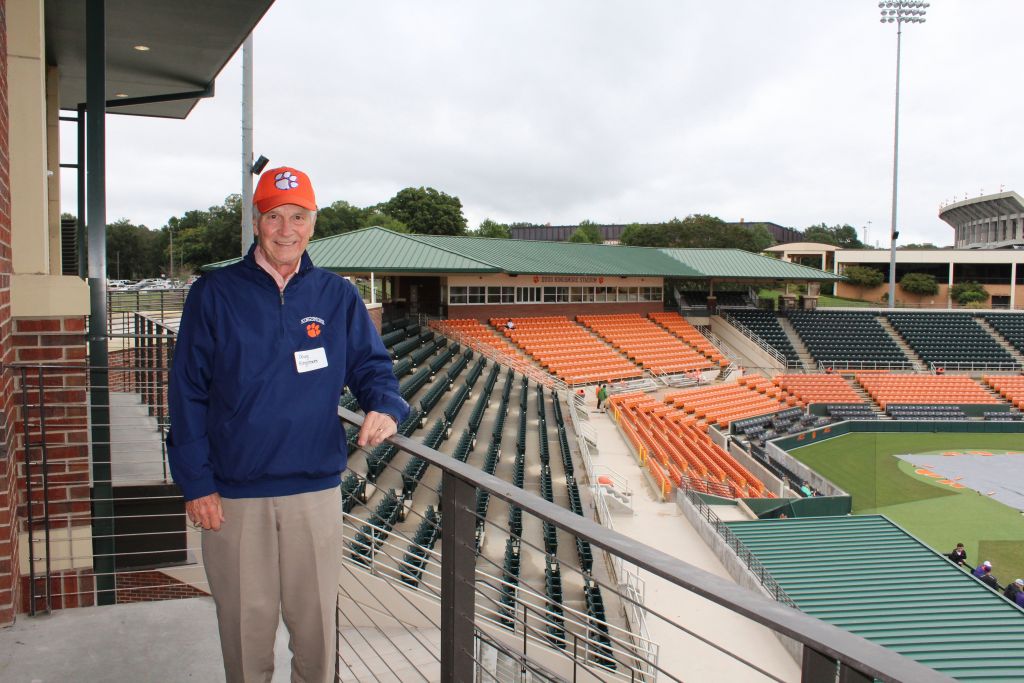 Kingsmore played three years of professional baseball in the Baltimore Oriole organization before beginning a successful business career. He served three terms on the Clemson University Board of Trustees and became trustee emeritus when his elected term expired in 2002. 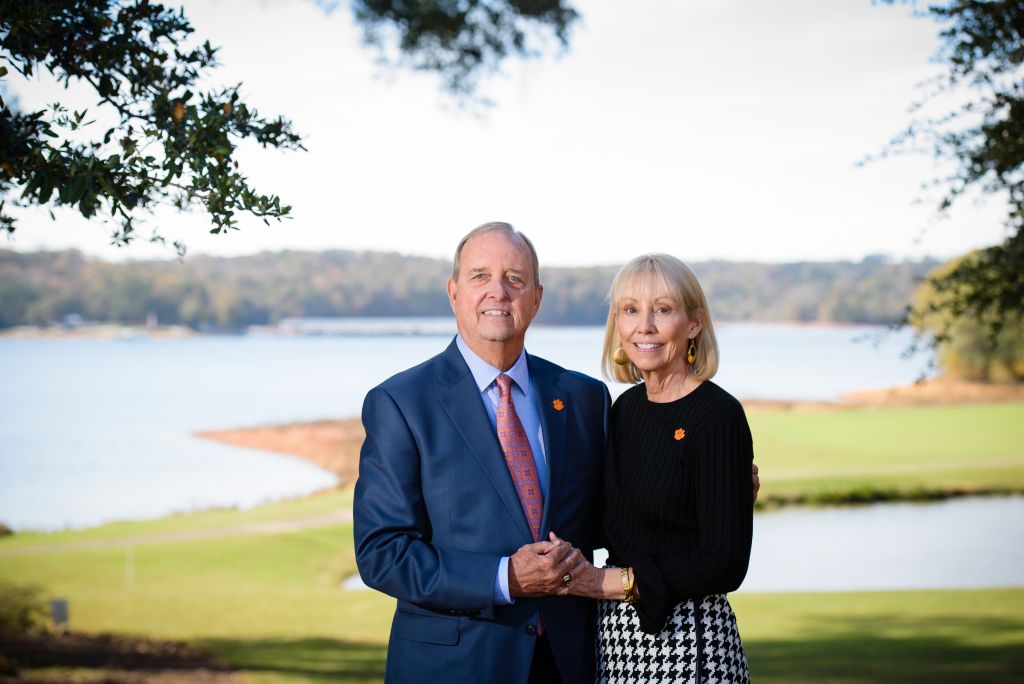 As a student-athlete, Chapman received an IPTAY scholarship that funded his Clemson education.

“I believe in paying back what is given to you,” he said. “My athletic scholarship provided me an outstanding college experience and a future career in professional baseball upon graduation, as well as a quality education.”

Upon graduation, he became the first Tiger to be selected in the major league draft when he was taken by the Philadelphia Phillies in 1965. He played professional baseball until April 1968, when he was called to active military service.