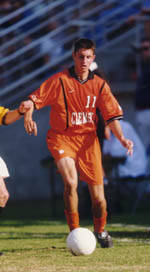 Clemson, SC – Clemson midfielder Mark Lisi claims this week’s Atlantic Coast Conference Men’s Soccer Player of the Week honors after leading the Tigers to a 2-0 record in last week’s play. Lisi, a junior from Englewood, Colorado, scored four goals and two assists for a total of ten points as Clemson defeated Brown 2-1 and No. 20 Cal-State Fullerton 5-1 in the Clemson Invitational. His top performance of the weekend was against No. 20 Cal-State Fullerton when he recorded two goals and two assists. Lisi was also tabbed with Offensive MVP honors at the Invitational.