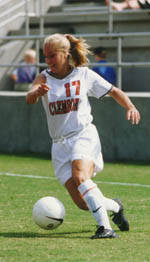 Soccer Teams In Action On Wednesday

CLEMSON, S.C. – The Clemson men’s and women’s soccer teams will be in action Wednesday night at Historic Riggs Field.

The Clemson Women’s Soccer team, ranked fourth in the nation, will entertain top-ranked North Carolina at 7:30 p.m. The Lady Tigers are ranked fourth by the NSCAA poll and fifth in the Soccer America listing. North Carolina is ranked first in both polls and won the 1999 National Championship. Clemson is led in scoring by freshman Lindsay Browne with five goals and three assists for 13 points.

The fourth place ranking is the highest the Lady Tigers have ever been ranked in the program’s history. Clemson also is 6-0 this season and is off to its best start ever.

The Clemson men’s team is ranked 10th in the latest Soccer America poll and will play host to Appalachian State at 5:00 p.m. on Historic Riggs Field. Clemson is led in scoring by Ross Goodacre with two goals and five assists for nine points.

The Tigers have a 2-1 record this season.