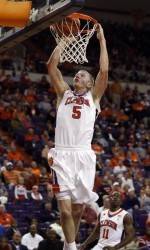 Smith Continues to Put Others’ Needs Above his Own

CLEMSON, SC – Outside of his own family, nothing in this world means more to Tanner Smith than Tanner’s Totes.

Tanner’s Totes is a non-profit organization he runs with his parents, Craig and Kathy Smith, out of their home in Alpharetta, GA. For nearly 10 years now, since he was 12 years old, Tanner has been handing out special tote bags geared for preteens and teenagers who are suffering from long-term cancer treatments.

The organization means so much to Tanner, he even puts it above his basketball career when he has to in order to spread the word and raise more funds for his totes. Case in point, he recently cancelled an up-and-coming trip to the St. Vincent Sports Academy in Indianapolis so he can showcase Tanner’s Totes on a new ABC television show called “Everyday Health.”

St. Vincent Sports Academy is one of the country’s top fitness and training centers where all athletes, including professionals, undergo a special workout routine geared toward his or her own needs and wants. Tanner also utilized the program in the summer of 2010.

“He said, `Dad, I will not get as good a workout as I would if I went up, but I will still work out hard that week,'” Craig said. “We had the flight and everything planned, but Tanner said, `We can go up there a little bit later.’

“Even if he doesn’t, he said this is more important.”

“Everyday Health,” which will air on Saturday mornings this fall, will showcase extraordinary Americans who are facing or have overcome health issues, and are paying it forward. Educating and inspiring others to do the same, the show will produce all original content and integrate a portfolio of experts, online tools and mobile applications.

ABC is scheduled to film Tanner at his family home in Alpharetta, GA from Aug. 15-17.

“That will be fun. I think it will be great exposure for Tanner’s Totes, obviously. Just the connection with ABC will take it to another level.”

It’s a level ABC’s sister network has already elevated it to once before. Since ESPN.com told Smith’s story in February of 2009, Tanner’s Totes has now exceeded more than $20,000 in donations. In late May, one of the casting directors contacted Tanner about being on the show after an Atlanta hospital nominated Tanner.

“We have been praying about where Tanner’s Totes was going to go after he left Clemson. He wants to do it forever,” Kathy said. “We don’t want it to be about us. We want something that will help keep cheering up the kids in the hospitals.

“So out of the blue we get this email that someone at Scottish Rite in Atlanta had nominated Tanner for the show. That was May 27 when the first contact was made, and ever since we have been kind of back and forth.”

Tanner, who is entering his senior season as a starter on Clemson’s men’s basketball team, got the call on Monday, July 11 that ABC had indeed casted Tanner’s Totes as part of the show. Since then, he has been on cloud nine.

“I was super excited and I called my parents immediately,” the three-time All-ACC Academic Team member said. “It is something that is so cool, and being here at Clemson has helped it reach that level. Having a place like this, where it is put on a pedestal, people can really help out. Clemson just embraces so much.

“There was nothing it (Tanner’s Totes) could do except get better from here.”