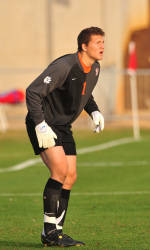 CLEMSON, SC – Jason Herrick scored the match’s lone goal early in the first half in leading sixth-ranked Maryland to a 1-0 win over Clemson in an Atlantic Coast Conference men’s soccer match at Clemson, SC Friday night.

Maryland scored in the 14th minute. Kaoru Forbess gave the ball to Taylor Kemp who sent a pass into the box to Jason Herrick. Herrick ran onto the pass and sent a 12-yard shot in the lower right corner of the goal. This was Herrick’s sixth goal of the season.

“This was like so many other games for us this season,” said Clemson Head Coach Phil Hindson. “We battled real hard and just came up short. It comes down to the lack of composure in the final 1/3. Our players gave it everything they had. We’ve struggled to score this season, but we haven’t given up many either. Our defenders played really well tonight. I can’t ask any more as far as our effort is concerned.”

The victory was the first by Maryland at Historic Riggs Field since the 2003 season.

Clemson will play host Furman on Tuesday, October 20, in the Tigers’ next action. Match time is set for 7:00 p.m.