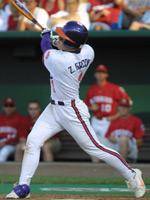 Maryland scored six runs in the seventh inning after Clemson scored three runs in the top of the frame to down the #15 Tigers 8-4 in game two of a doubleheader Saturday at Shipley Field. Maryland improved to 14-22 overall, 2-11 in the ACC, while Clemson fell to 26-12, 4-7 in conference play.

Maryland got on the board first in the third inning when Kyle George led off with a homer to left-center, his fourth of the season.

Clemson tied the score at 1-1 in the fifth inning. Zane Green hit a one-out single up the middle, stole second, advanced to third on a throwing error by the pitcher, and scored on Herman Demmink’s bloop infield hit behind the mound.

Maryland threatened to take the lead in both the fifth and six innings, but Patrick Hogan worked out of jams both times. In the fifth, Joe Sargent’s sacrifice bunt attempt with no outs and runners on first and second was not successful, as Hogan threw the runner out going to third. Then Hogan struck out the next two batters. In the sixth, Ray Gemmill led off with a double to center and advanced to third on a sacrifice bunt. But Hogan got Justin Maxwell to strike out looking and Bobby Ryan to ground out to end the threat.

Zane Green led off with a double to right field in the seventh inning, his third hit and second double of the contest. After Brady Everett advanced Green to third on a deep fly ball to center, pinch-hitter Ryan Hub executed a squeeze bunt to plate Green. Hub had taken the first pitch for a strike prior to Head Coach Russell Triplett doubled just inside the third-base bag and Brad McCann lined a 1-2 pitch right past the third-base bag for a double to drive home Triplett. It was McCann’s first hit in six at bats in the series. Kyle Frank followed with an RBI bunt hit to third base to give Clemson a 4-1 lead.

Again in the bottom of the seventh, the Terrapins put runners on first and second with no outs thanks to singles by Brian Jarosinski and George. Then back-to-back walks by Mike Costantino and Anthony Buffone plated a run. Then Gemmill singled through the left side to plate another run and cut the Tigers’ lead to 4-3. Will Frazier followed with a single on an 0-2 pitch through the right side to tie the score, then Maxwell lined the first pitch he saw to left field for a run-scoring single to give Maryland a 5-4 lead. Ryan then walked with the bases loaded on four pitches. After being down in the count 1-2, George worked a bases-loaded walk to give Maryland a 7-4 lead.

Gemmill, who was 4-for-5 with two RBIs in the game, hit a solo homer in the ninth inning to give Maryland an insurance run.

Clemson will play the series finale at Maryland Sunday at 1:00 PM at Shipley Field.